Temperatures across Southeast Colorado will be below normal Wednesday as another round of monsoon moisture spreads across the area.
While exact locations for the heaviest rains are unknown, be alert to the flood risk throughout the area. A flash flood watch will be in effect from 3:00 p.m. Wednesday until 3:00 a.m. Thursday.

In northeast Colorado, all of Sedgwick and Phillips counties, along with smaller portions of Logan, Weld and Yuma counties remain abnormally dry after being drought-free until two weeks ago. Portions of Larimer and Jackson counties in north central Colorado are also abnormally dry.

Eastern Colorado will continue to bake under temperatures reaching 100 in some areas Friday, while the west watches for floods.

Recent afternoon showers and thunderstorms that have brought welcome rain for Colorado crops, along with areas of flooding, begin to taper off Sunday. 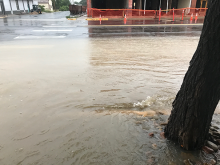 Have a photo from across southeast Colorado you would like to share? Use this handy form to upload it!

Below are photos from the impacts to Eads in Kiowa County. Video is also available here.

One-third of Colorado is now abnormally dry, a dramatic increase over less than 15 percent of the state's area just one week ago.

In northeast Colorado, all of Sedgwick and Phillips counties, along with smaller portions of Logan, Weld and Yuma counties are now classified as abnormally dry after being drought-free last week. Portions of Larimer and Jackson counties in north central Colorado also shifted to abnormally dry.

The greatest expansion occurred in northwest and west Central Colorado, where all or portions of 22 counties are now under abnormally dry conditions.

Seasonal monsoon moisture that has brought heavy rain and thunderstorms to Colorado's eastern plains for the latter half of the week will continue Saturday afternoon, while the west slope continues to see hot and mostly dry conditions.