EarthTalk – Are the new supersonic jets friendlier to the environment than those of the past?

Are the new SST jets friendlier to the environment than the SSTs of the 1970s?

Nearly 20 years have passed since the last flight of the Concorde, the first supersonic passenger-carrying commercial airplane (or supersonic transport, SST). The aircraft cruised the Queen of England and the ultra-wealthy across the seas at Mach 2 speed, or 1,350 mph, while soaring at an altitude of 60,000 feet. In 1996, the Concorde achieved its fastest flight from New York to London in under three hours.

Now a new wave of supersonic flight may be on the horizon with the recent partnership between United Airlines and Denver-based Boom Supersonic. In June 2021, United Airlines announced plans to purchase 15 of Boom Supersonic's first commercial supersonic jet, the Overture. Boom plans to engineer the Overture to fly up to 88 passengers at a speed of Mach 1.7, or 1,300 mph, at 60,000 feet. Most flight times will be cut nearly in half: Traveling from Paris to Montreal will only take three hours and 45 minutes instead of the usual eight and a half hours; a trip from San Francisco to Tokyo take just six hours rather than the usual 10 hours and 15 minutes. 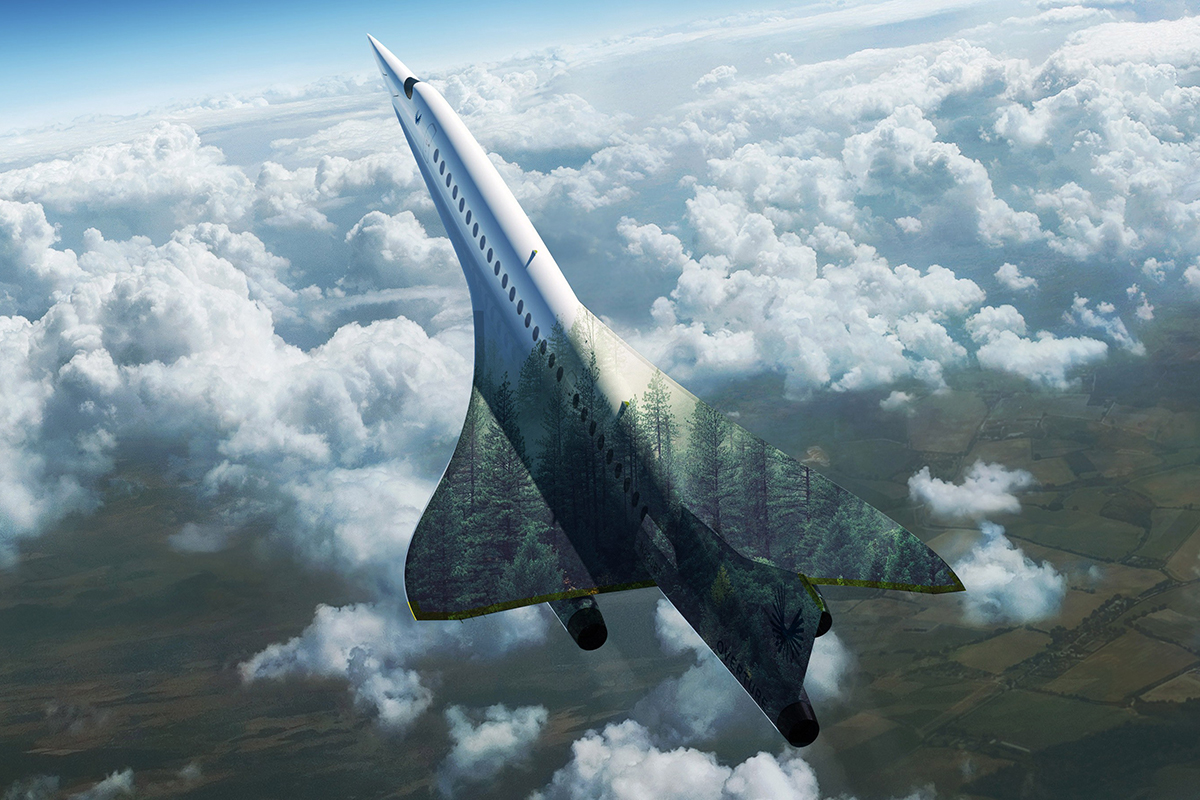 Boom and United plan a modern, economically-viable, ecologically-sustainable version of the old Concorde, which was "a ludicrously expensive environmental disaster," according to the International Council on Clean Transportation. "It helps to remember that we're talking literally about 1960s technology," Boom Supersonic's Founder Blake Scholl told CNN Travel. "So much has changed."

In collaboration with Prometheus Fuels, a California-based company, Boom plans to design a 100 percent carbon-neutral plane powered by sustainable alternative fuels. The company claims that Prometheus' technology is able to economically remove CO2 from the air and use renewable, clean electricity from solar and wind to turn it into jet fuel. After successfully running their XB-1 test engines with a blend of more than 80 percent sustainable aviation fuel, Boom has confidence that sustainable fuels can safely be used in flight. If all goes as planned, the Overture may be flying passengers as soon as 2029.

Virgin Galactic is also throwing its hat into the ring of supersonic commercial air travel. In August of 2020, the company unveiled plans to collaborate with Rolls Royce in developing sustainable commercial high-speed aircraft capable of an astonishing Mach 3, or approximately 2,300 mph. The smaller-scale aircraft will hold 9-19 passengers and utilize state-of-the-art sustainable aviation fuel and "other sustainable technologies and techniques."

Aerion Supersonic, which publicized plans last year to build a $375 million manufacturing facility at Florida's Orlando Melbourne International Airport, also expressed its commitment to having carbon neutral emissions and designing their aircraft to run on 100 percent sustainable aviation fuels. However, due to financial challenges, the company announced in May 2021 that it will not be able to move forward with the facility at this time.