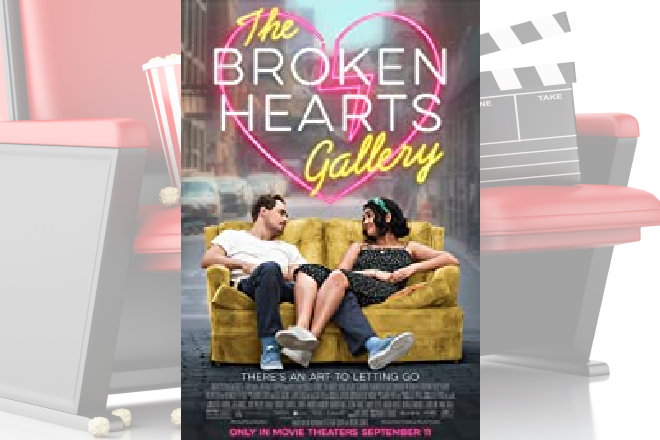 Without access to a theater this weekend, I resigned myself to watching "The Broken Hearts Gallery" On Demand. This is a movie I would have reviewed back in September had the theaters in NYC been open. It turns out that the movie is a better fit for On Demand than it ever was for theaters. The theater experience usually promises to force you to the edge of your seat, this movie lends itself better to sprawled-out bed and couch viewing. It's a romantic comedy without any (as yet) huge names attached, so it was never going to make much of an impact at the box office, but if the goal is lighthearted, inoffensive home viewing, then this makes a better choice than the many failed action movies that clog up most On Demand menus.

Most romantic comedies (most movies, really) start off with the main character either in a rut or thinking they have things figured out and then they find themselves in a rut. This one falls into the latter category. Lucy (Geraldine Viswanathan) is an up-and-coming gallery assistant with a great boyfriend in Max (Utkarsh Ambudkar). She's unexpectedly tapped by her boss Eva (Bernadette Peters) to serve as emcee for an important gallery opening. Nervous, she gets drunk. Then she sees Max reconnect with an old flame. She makes a scene, officially losing both her boyfriend and her job in the process. She ends the miserable night by going home via ride share, but she mistakenly gets into the non-share vehicle of Nick (Dacre Montgomery). He feels sorry for her, so he drives her home anyway, where she sulks for several days surrounded by her roommates Amanda (Molly Gordon) and Nadine (Phillipa Soo) and her massive collection of trinkets leftover from all her failed relationships.

Lucy and Nick meet again, and they bond and flirt. He takes her to the old hotel he's restoring, and she jokingly hangs one of Max's ties on a wall. She discovers the next day that someone else has similarly posted an item from an ex - a road map - on the wall as well. This gives Lucy the idea to invite more people to bring in keepsakes from old relationships in the name of commiseration. Soon she's trending on social media and setting up a gallery of her own. Nick is reluctantly supportive, but cautions her that the space may not be available for very long, since he needs a big loan to keep the project going. Can these two smart-and-determined-but-awkward twentysomethings find a way to succeed both professionally and romantically? I didn't say this movie could be watched in bed because a wrecking ball plows in, destroying both the hotel and the gallery and sending debris crashing down on our leads.

A road map is the catalyst for the gallery in this movie, and this movie follows the romantic comedy road map annoyingly closely. Heartbreak is on cue, fun is on cue, inspiration is on cue, the old boyfriend trying to take Lucy back is on cue, a secret of Nick's getting exposed and causing turmoil is on cue, physicality is at least admirably delayed, but it's there. Enough about the predictable destination, how's the journey? It's fine. Lucy and Nick have good chemistry, though the chemistry between Lucy and the roommates is even better. Viswanathan's star is on the rise, and she has more challenging roles on her horizon, so enjoy her in these agreeable fluff pieces while you can. There's not much to actively dislike about "The Broken Hearts Gallery," but this is an unambitious movie, and even with entertainment options limited, there are still plenty of more ambitious things you can do with your time.

"The Broken Hearts Gallery" is available On Demand through online streaming, and likely through your local cable provider. The film is rated PG-13 for sexual content throughout and some crude references, strong language, and drug references. Its running time is 109 minutes.