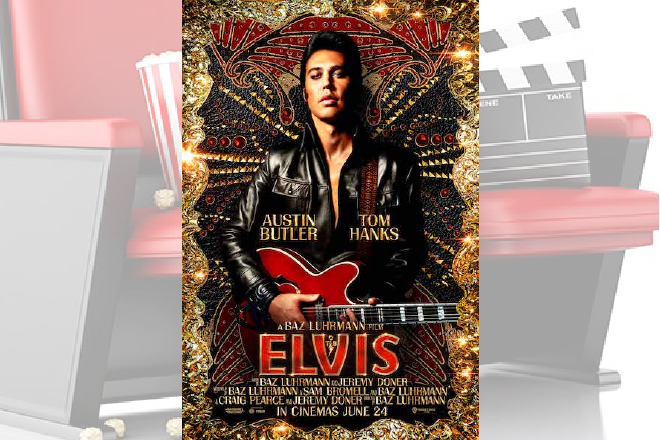 A biopic of Elvis Presley is an absolutely perfect fit for director Baz Luhrmann. The filmmaker is known for a garish visual style that, while not "ugly" per se (and in fact can be quite beautiful if seen with the right eyes), always screams "excessive." He captured the spirit of flashy rebelliousness in the party scenes in "The Great Gatsby" in 2013 and turned the "Moulin Rouge!" into a paradise of hedonism in 2001. Elvis, or at least his onstage persona, was all about exploiting rebelliousness and hedonism, and looking like the most ambitious kind of eyesore in the process. It's a shame that Elvis and Luhrmann were professionals in different eras because one wonders what they could have created if they had worked together. As it is, we must settle for Luhrmann simply creating this lengthy tribute to Elvis.

All the expected pieces of the music biopic are covered here. We follow Elvis (Austin Butler) from his well-meaning early days on the carnival circuit to a successful tour where he picks up some bad habits to superstardom and cockiness to a humbling decline to a roaring comeback to misplaced complacency to the utter destruction of his life. Rise and fall, rise and fall, tragic end. The closest thing I'd say this movie has to an "insight" about Elvis is a scene where he confesses that he fears that he won't be remembered. His fame has been well-established at this point, and if he were thinking more clearly, he couldn't possibly mean what he's saying, but still, it's a powerful reminder that everyone thinks like this sometimes.

The story is told from the point of view of Elvis's manager, "Colonel" Tom Parker (Tom Hanks). Really, all three parts of that name should be in quotation marks with what a phony this guy is. Every stereotype about the greedy, manipulative, criminal manager is on full display with Parker. Come to think of it, Parker himself probably did a lot to helm that stereotype. The movie adds face-fattening makeup and a Dutch accent stolen from "Austin Powers in Goldmember" to make the character even more repulsive. It makes sense that he would technically be the main character in this movie. Not because everyone is the hero in their own story, that's to be expected, but because it's so on-brand for him to take something of Elvis's and make it all about him.

The music in the movie has its hit-or-miss moments. Butler is better at capturing Elvis's dance magic and stage presence than his singing voice (then again, was it ever really about the singing?). But there are some memorable performances, made more memorable by the funny facial expressions made by screaming female extras. Sometimes the Elvis songs are remixed with hip hop, which works a few times, but probably should have been done more sparingly.

I've been told that, like many biopics, this movie makes Elvis out to be a better person than he was. Apparently, he did more drugs, was more of a sexual deviant, had a worse attitude, and his integration of Black mannerisms into his act was less "drawing inspiration" and more "cultural appropriation." True, you're just as naive as the young version of the character if you think he was an angel perverted by cynical forces. But at the same time, you can't expect a PG-13 movie that celebrates Elvis's style and showmanship to paint him in too harsh of a light, even though Colonel Tom no doubt made a mint off paintings that did just that. Come for the superficial visual style, stay for the superficial visual style. "Elvis" doesn't need to work as a deep movie to deliver on the flair it promises.