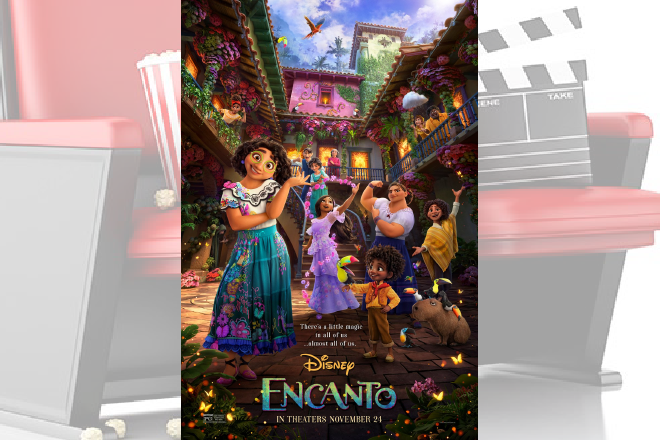 Disney has done it again. The studio synonymous with animated movie musicals has given us another classic to add to the collection in "Encanto." It's a good one, with diligent animation, imagination on display in nearly every frame, and songs by current Broadway king Lin-Manuel Miranda. It's such a well-polished movie that even though I know what I'm seeing is practically perfect, it's hard not to dwell on a few minor imperfections.

The movie centers around the magical Madrigal family, particularly teenager Mirabel (Stephanie Beatriz). Abuela Alma (Maria Cecilia Botero) lost her husband years ago, but was granted a miracle in the form of an enchanted candle that brought her house to life and gave superhuman abilities to her descendants. Now Mirabel's mother Julieta (Angie Cepeda) can heal any injury with her cooking, her aunt Pepa (Carolina Gaitan) can control the weather with her mood (usually in the form of rain, to avoid confusion with another Disney character with ice-based weather powers), her uncle Bruno (John Leguazamo) can see into the future (but he's been exiled due to some upsetting prophecies), her cousin Dolores (Adassa) can hear everything - especially things she's not supposed to, her cousin Camilo (Rhenzy Feliz) is a shape-shifter, her cousin Antonio (Ravi-Cabot Conyers) can communicate with animals, her sister Luisa (Jessica Darrow) is super-strong - both in physicality and resolve, and her other sister Isabela (Diane Guerrero) can grow plant life at will - though some say her real power is perfection. And again, the house itself is imbued with magic, with cupboards and floorboards that serve the family's every need. One of those imperfections I mentioned is that it seems like overkill to have both the characters and the house be magical. As fun as the house is, I feel like it should be the star of its own movie, here it feels like a hat on a hat.

Aside from her uncle Felix (Mauro Castillo) and father Agustin (Wilmer Valderrama), who were born to non-magical families, Mirabel is the only Madrigal without a special gift. She wants one - badly, and she was supposed to get one, but something went wrong (we never find out what, exactly) at her gift-granting ceremony, and now she feels like she's less gifted than everyone else. Think there'll be a lesson in here about how you don't need magical powers to be truly gifted? Plus she still gets to interact with the house, which as far as I'm concerned is like having magic of her own.

The problem is that the magic of the house is on the fritz and in danger of disappearing. Maribel wants to save it to prove her worth, but how does she save something so intangible? The answer likely lies with her ostracized uncle Bruno, but the rest of the family is so creeped out by him that he's practically considered a villain. If Mirabel wants to save the magic, she'll have to do something with Bruno and the rest of her family that is way out of everybody's comfort zone... communicate with them.

For all its eye and ear candy, "Encanto" is a movie where a lot of drama could have been spared with a few well-chosen words and previous hugs. It also plays a little to blatantly to certain Disney tropes, especially with that MacGuffin-y candle that the characters practically destroy themselves trying to protect. And the songs, while catchy, really only make sense in the context of the story and can't stand on their own. But to focus on those complaints is to miss the bigger picture. Disney has delivered a cute, funny, creative, expertly-animated movie with songs by one of the all-time greats. You'll do well to take the family to see it this holiday season.

"Encanto" is rated PG for some thematic elements and mild peril. Its running time is 99 minutes.