I should start off by saying that I'm not a fan of "Pokemon." I have never found the game or its creatures to be cute, funny, interesting, or worthwhile. Except for Squirtle the Turtle, who I just "get" because of my love of turtles. But I feel that it's important for you to know that this review is not coming from a place of fandom. If you or someone in your family is indeed a fan of Pokemon, they will probably like this movie more than I did. I've been told that many people who don't like Pokemon do in fact like this movie (it's currently sitting at a 63% Fresh rating on Rotten Tomatoes, making it the best-reviewed video game adaptation of all time), but I am not one of them. 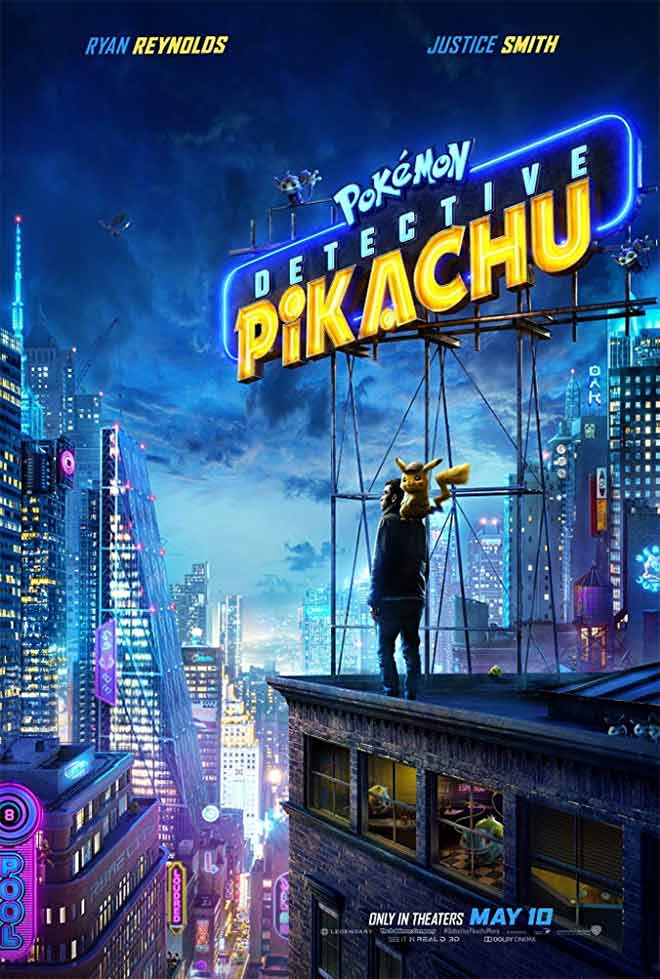 And I tried to give this movie a chance, I really did. I was looking forward to a grittier Pokemon movie where cat-thing Pikachu's incessant repetition of his own name was replaced with Ryan Reynolds smart-aleckry. Deadpool trying his hand at a children's franchise was something I had to see. I knew he couldn't be too crude in this PG-rated movie (though a surprising amount of smutty jokes make it into the film), but I was looking forward to seeing how his general attitude would translate. Sadly, "Pokemon" dopiness wins out over "Deadpool" irreverence.

The movie takes place in Ryme City where humans and Pokemon live side by side. Supposedly they're equals in contributing to society, but I didn't see the Pokemon bringing many skills to the table, with the unsurprising exception of Squirtle, who can put out fires. Tim (Justice Smith) is the estranged teenage son of detective Harry (whose casting is a surprise), who has to travel to the city when he learns his father's been killed. At Harry's apartment, Tim runs into Pikachu, who was apparently Harry's partner, though a recent bout of amnesia has left him unclear on the details. Also, Tim can hear Pikachu speaking in Reynolds' voice, where everyone else just hears "Pika Pika."

Pikachu believes that Harry is still alive somewhere, and that solving a case they were working together will help reunite him with his son. Tim and Pikachu form an uneasy alliance and team up with aspiring reporter Lucy (Kathryn Newton) to investigate Ryme City's seedy underbelly. They wind up in front of founder Howard Clifford (Bill Nighy) who believes that his son (Chris Geere) is performing illegal experiments on Pokemon and that Harry was about to thwart him. The son is clearly not sharp enough to be the movie's Big Bad, and I gritted my teeth waiting for the obvious "real" villain to be revealed. The final showdown occurs during a sloppy mass panic where even Ken Watanabe (who made the film seem respectable in an earlier scene as Harry's captain) can't maintain his dignity.

The action scenes are lame, Tim and Lucy are shoddy human protagonists, and the worldbuilding is a knockoff of "Who Framed Roger Rabbit" without the legendary chemistry. On top of that, we get a last-minute twist that makes Tim look like the least-cognizant person on the planet. A lot rides on what Reynolds can bring to the table, and of course he's the best thing about this movie (I even found myself quoting some of his dialogue at work the next day), with my favorite bit being a tearful version of the "Pokemon" theme that he sings while wallowing in self-pity, but he's not enough to save the movie as a whole. I'd recommend crossing "Pokemon: Detective Pikachu" off your list of suspects for which movie to see.

"Pokemon: Detective Pikachu" is rated PG for action/peril, some rude and suggestive humor, and thematic elements. Its running time is 104 minutes.