It's no accident that "Ready Player One" opened on Easter weekend, as this movie is obsessed with Easter Eggs. Not the kind one paints and puts in a basket, but little bonuses hidden in various forms of media. The characters in the film are on the hunt for an Easter Egg that gives them control over a virtual reality empire, but more importantly the film itself is full of Easter Eggs designed to delight those nostalgic for pop culture from the late 70's through 90's. 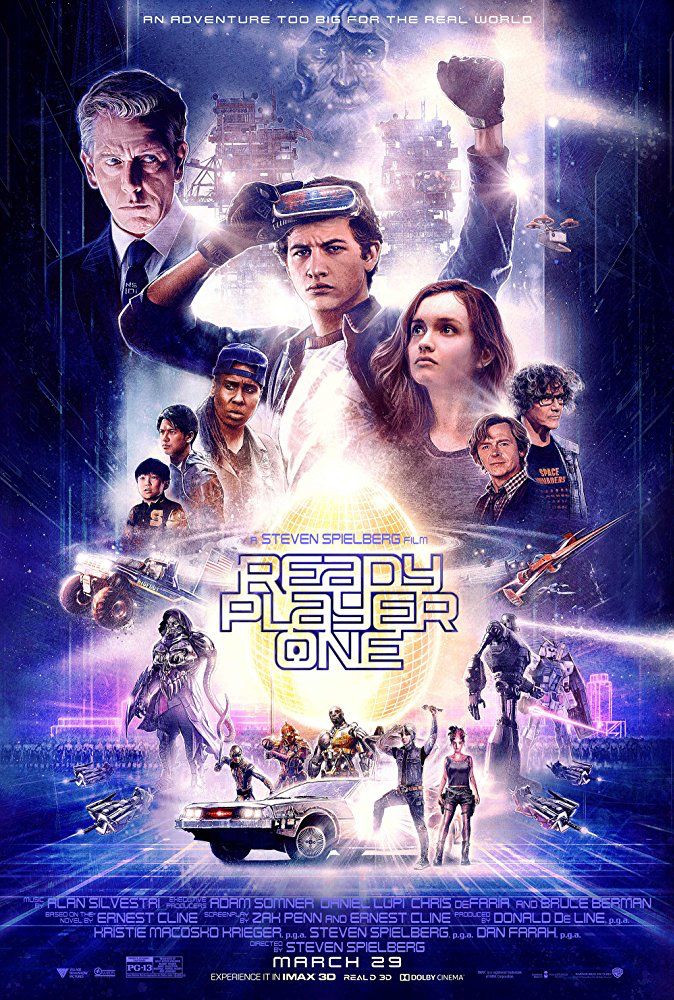 The film takes place in a future where the real world is bleak, but a virtual world called The Oasis is thriving. The Oasis allows users to do whatever they want as whoever they want. You can be a better version of yourself or take on the persona of an existing character. Wade Watts aka Parzival (Tye Sheridan) spends most of his time on a quest to collect the ultimate Easter Egg, one hidden by The Oasis's late designer (Mark Rylance) and attainable by gathering three keys. Nobody has ever gotten even one key, but Parzival has studied the life and the interests of the designer well enough that he knows he's on the cusp of solving the riddles protecting the keys.

Of course, not everyone is as pure of heart as Parzival. A corporation led by the greedy Sorrento (Ben Mendelsohn) wants to take the keys and The Oasis by force. The corporation employs a few nerds to try the riddle-solving route, but also a number of soldiers and assassins tasked with stopping Parzival and anyone else who's not in their pocket. Luckily, Parzival has help. His hulking friend Aech (whose actor I will not spoil) is one of the biggest, toughest beings in The Oasis. His buddies Sho (Philip Zhao) and Daito (Win Morisaki) are also among its most skilled users. Then there's Art3mis (Olivia Cooke), whose prowess is legendary. You're not supposed to fall in love in The Oasis, but Parzival forgets this rule the second he lays eyes on her.

The battle for The Oasis is entertaining enough, but it's the Easter Eggs that are bringing people to this film. I don't want to give away too much, but the film has been heavily pushing an appearance by The Iron Giant, no doubt to let the cult hero appear in a film that people actually see. There's also an extended sequence where the characters go inside a world created by the dysfunctional duo of Stephen King and Stanley Kubrick. One Easter Egg I found disappointing was a certain weapon used during a battle scene. How dare this film use this weapon without counting when the need to count has been famously overexplained. Other appearances and references are mostly left to the most momentary of glimpses. There are sequences in this movie that you'll need to watch frame by frame if you want to catch everything.

That's the problem with "Ready Player One," it moves too fast. I'm not necessarily talking about all the Easter Eggs because I'm sure their brevity is deliberate so as not to distract from the story. What I mean is that the rules and history of this world go by so quickly that I felt lost at several points. I found myself repeatedly saying "I'm sure they explained this" without remembering what that explanation was. This movie is 140 minutes long, and I couldn't help but wonder how much more fleshed-out it would have been at 200. The fact that I want more of this movie speaks to how much it does right, because this is indeed an exciting thrill ride from blockbuster extraordinaire Steven Spielberg. It's a highly enjoyable movie, but it requires your full attention.

"Ready Player One" is rated PG-13 for sequences of sci-fi action violence, bloody images, some suggestive material, partial nudity and language. Its running time is 140 minutes.