Barbara Ann Weirich, 83, passed away Wednesday, January 10, in the year of our Lord, 2018, with her family by her side in Pueblo, Colorado.

Barbara was born January 22, 1934 in Las Animas, Colorado, the only daughter of John and Hazel (Barnhart) Shriver and sister to seven brothers. She attended school and graduated from Las Animas High School in 1953. 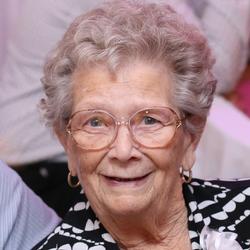 Barbara was the original "Pioneer Woman" as she lived a full life, proudly farming and ranching alongside her husband and more currently alongside her two sons Mike and Mark, raising cattle and various crops. The Weirich Ranch was recognized as a Colorado Centennial Ranch in 2013 at the Colorado State Fair. She was the last of the third generation that helped build the family legacy.

Wayne and Barbara were long time members of the First Christian Church in Eads. Nothing made her happier than when her family would attend church with her on Sunday.

Family was everything to Barbara. She enjoyed the summer fishing and camping trips. During the school year, she was watching her kids and grandkids sporting events as she was their biggest fan and supporter. Barbara was a "full-time" mother who stayed home managing the household. She was an amazing cook, her homemade bread was a family favorite, but her rhubarb pie was a special treat.

Many family memories were made during Thanksgiving, Christmas, Easter and at branding and harvest times, as those were the times that she was surrounded by her family. The family always looked forward to these times even when it meant a lot of work needed to be done. In the end, they always knew that they would be rewarded with a home-cooked meal specially prepared by their favorite cook.

Her grandchildren were the true highlight of her life. Each one of them enjoyed coming out to the farm. Whether it was learning to cook, taking a trip to town, or a game of pitch or canasta during lunch, each one of her grandchildren have special memories of their time spent with Grandma. She crocheted an afghan for each one of her children, grandchildren and great grandchildren. She enjoyed doing this and the surprise on their faces when they received them made it all worth the effort.

Barbara loved sports, and throughout her lifetime she had watched a lot of it. She was so proud of the athletic achievements of her children and grandchildren. She also watched a lot of sports on television, some of her favorite teams were the Denver Broncos, Colorado Rockies or Kansas University Basketball.

Barbara enjoyed the many friendships that she made during her lifetime and cherished each and every one of them. She especially enjoyed her years of Wednesday afternoon bowling with Margaret Frazee, Sandi Kelley and Karla Buck. She was a member of the Bent/Kiowa Cowbelle's Association for many years, holding many offices and serving on committees. She was honored to be the 2005 Cattlewoman of the Year.

She will be greatly missed by her children, family, and friends that knew her. Those left behind will always have cherished memories of their time with her.

Proverbs 31, 28-29 Her children arise and call her blessed; her husband also, and he praises her: 'Many women do noble things, but you surpass them all.'