Evelyn Irene Brenton Garner was born August 29, 1922 in Beaumont in Butler County, Kansas to Harry and Julia (Greenwell) Brenton. Four years later a little brother, Ivan Eugene joined the family. Evelyn entered the first grade at Keighly, Kansas and was advanced to the second grade before Christmas. In February 1929 the family moved to a farm in Prairie Queen northwest of Eads. Evelyn was an outdoor girl, riding horses, milking cows, feeding the hogs, driving tractors, and grain trucks. She helped her dad shingle the barn. She played ball with the neighborhood boys. 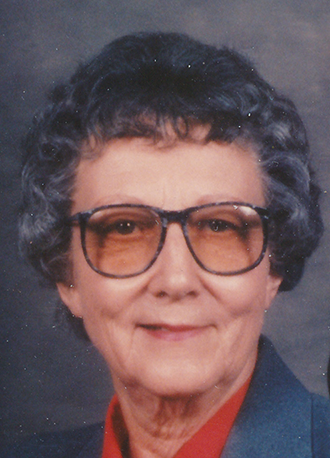 Kids in the 30's had to entertain themselves. In the spring Evelyn and Ivan would go to the prairie dog town in the pasture. Armed with a garden hoe and a pitch fork, they would kill dozens of snakes and hang them on the barbed wire fence. In September 1929 she entered the second grade at Prairie Queen School, graduating from the eighth grade  in 1936. Fifty years later in April of 1986 she received her GED in a ceremony at Lamar Community College. This was a proud moment in her life. It takes some people longer to get through High School.

The Brenton's moved to Colorado just in time for the dust storms. Evelyn lived through the dirty thirties with her parents and the dirty fifties with Dan and the boys. There was very little or no moisture and many years - no crops. They also raised cattle, hogs, chickens and turkeys. Although the income was very small, they never went hungry.

Evelyn was doing housework for a family in Las Animas in 1941 when she met Dan Garner. Dan was drafted into the U.S. Army on October 17, 1941. She worked as a waitress while waiting for the war to be over. Dan returned from overseas in June of 1945 and they were married on June 29th. To this union four sons were born - James Roy, Eugene Lee, Gale Eldon and Merle Allen.

In 1947 Dan and Evelyn bought a farm 2 1/2 miles from the Brentons where they lived until 1965 when they purchased a home in Eads. They continued to farm and also owned and operated Eads Bowling Lanes. Dan and Evelyn both loved to garden and grew prize winning vegetables. In the summer you could always leave their home with a bag of cucumbers, zucchini, tomatoes and squash. Giant purple alliums grew around the gardens. Evelyn was in charge of ticket sales for the Kiowa County Fair for 39 years and loved every minute of it. She was a member of the United Methodist Church, a charter member of United Methodist Women and taught a Sunday School Class at the E.U.B. Church before the churches united.  She enjoyed piecing quilts and crocheting. Evelyn drove school buses for many years. In the summers she drove kids to ball games all over the area.

During the 1950's she baked more than 1,000 angel food cakes for local restaurants and special occasions. More recently she baked cinnamon rolls and she was as generous with the rolls as she as her vegetables. She enjoyed playing canasta and pinochle. She also worked the daily crossword puzzle. Dan and Evelyn worked on numerous improvement and maintenance projects on the United Methodist Church and parsonage. She took great pride in keeping the trees on Maine Street trash free and looking good! She and Dan were awarded "The Community Distinguishing Service Award" in 1999 by the Eads Chamber of Commerce.

After retirement they enjoyed going on bus tours. They visited almost every state in the union plus Canada, the Bahamas and Nova Scotia. Evelyn missed not having sisters or daughters but felt fortunate to have her mother (Julia Brenton) for 80 years. She cared for her mother with love and devotion. Mrs. Brenton was 102 when she passed away. In 1970 a homeless young man (John White) appeared on their porch in a snow storm. He stayed for 6 weeks and continued to visit for the next 30 years. He said Dan and Evelyn were the parents he never had. In 1995 Dan and Evelyn celebrated their 50th wedding anniversary.

Evelyn loved life and lived it to the fullest. She never met a stranger. Friends were treated as family. Today is a celebration of a loving, lovable neighbor. Remember her with a smile.

Friends and family can register online condolences and sign the guestbook at www.brownfuneraldirectors.com.  Visitation and funeral services were entrusted to the care of the Brown Funeral Home.

Dear Dietitian – How to make the switch...