Jimmy Lee Richardson was born to Leonard and Viola Richardson in Blackwell, Oklahoma, October 7, 1928. (This was one year before the Great Depression.) He had three older brothers, two younger brothers and, 15 years later, a sister. 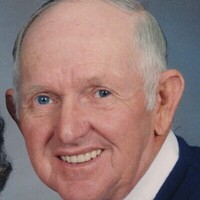 When he was nine years old, he moved with his family to the Ozarks near Springdale, Arkansas, for his father's health.

He walked or ran to a one-room country school and graduated from the 8th grade. The boys carried cornbread for their lunch and ate by themselves so the other kids wouldn't know that was all they had! Jim and his brothers were not able to go to high school.

He and his brothers cut wood and sold it by the rick. He plowed behind the horse, pulling a single plow, and just raised enough corn to feed the horse and furnish corn meal for the family.

No one had cars; they went by horseback or in a wagon.

When Jim was 16 years old, his dad was hit by a train and killed. The three older boys had been drafted, and were in the Army, so Jim was the one to take care of his mother, baby sister, and seven year old brother.

His grandfather in Blackwell had died about six months before and left his home there to Jim's mom. Jim had a sale, hired a neighbor with a truck to move them to Blackwell. He was there a few days while he had the mumps, and then, as soon as he was able (at age 16), he caught a bus for Ulysses, Kansas, where he went to work for Carl Christiansen. Ulysses was booming then. He hauled gravel, scooped it on and off the truck with a scoop shovel - no loader - and dug ditches for water lines.

When he wasn't working outside, he was working inside, taping sheet rock and plastering. He detested that!

When he was 19, he got a job at Gano elevator in Ulysses. He liked that.

Early in 1949, Gano was building elevators in eastern Colorado, including one in Sheridan Lake. A man from Ulysses was hired to manage it, and he wanted Jim to come as second man. Jim became the manager in the fall of 1952.

Jim was the mayor of Sheridan Lake for several years, served on the school board as a board member, as Sunday School Superintendent, Elder, and Horn Creek Ranch board member.

Jim liked to travel and has visited every state except Maine and Hawaii.

Jim is preceded in death by his parents and son, Randy.