Ken was united in marriage to Virginia Smith May 27, 1956. To this union they had three sons: Dan, Mike, and Ed. 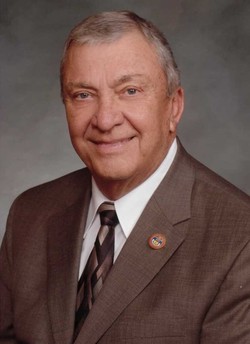 Ken was well-known as a natural politician and advocate for southern Colorado. "Ken was so well-liked that it was a natural transition for him to go into politics and he was respected by Democrats and Republicans alike," said Dick Wadhams, the former chairman of the Colorado Republican Party who helped Kester run for his first political office in 1974.

Kester was born in Lamar but grew up in Canon City where he excelled at sports, particularly track and basketball. He liked to recount to friends how he once won several races while wearing overalls.

He bought a General Motors dealership in Las Animas when he was just 29 and became a fixture of community life there.

In 1974, he decided to run for Bent County commissioner. That's when 19-year-old Wadhams helped him collect signatures or re-collect them after one enthusiastic signer spilled beer over the petitions. "All those stories are true," Wadhams laughed in recounting them. "Ken got one fellow out of bed to sign his petition." That was the beginning of Ken's long career as a commissioner, then state lawmaker in House District 47 and then Senate District 2, all representing southeastern Colorado, the largest geographic district in the state.

He made a legacy for himself looking out for small business, ranchers, public education and other issues. Wadhams said Kester was a throw-back to a time when lawmakers of both parties could have political battles but still be friends. "That was his secret. He genuinely liked people," he said. He left state office in 2011.

Ken was an initial investor of Bents Fort Inn and Las Animas/Bent County Golf Course. He was a member of the Elks, Lion's, and Quarterback Club. He had an easy style as a public speaker whether it was hosting the annual sports banquet or promoting a bill on the floor of the legislator. In his addresses, he rarely used prepared notes and relied on his natural skills and quick wit. As a long-term businessman and community leader, Ken was a strong supporter of youth athletics and his dealership, Kester Motor Co., continually sponsored baseball and softball teams. The impact that Ken has made on his small community as well as the entire state of Colorado is remarkable.

Ken is survived by his sons, Daniel Kester, Michael (Peggy) Kester, and Edward (Ron LaRocque) Kester; two grandchildren, Breanne and Ryan; special friend, Jerry Loflin; as well as many other relatives and a host of friends.

He was preceded in death by his parents, G.E. and Maurine; and by his wife, Virginia, in 1995.

Memorial contributions may be made to the Las Animas/Bent County Golf Course in care of Horber Funeral Chapel, P.O. Box 431, Las Animas, Colorado 81054.