Funeral Services for Joyce Davis will be held at 10:30 a.m. Monday, December 3, 2018 at the Holly United Methodist Church in Holly, Colorado with Pastor Kathy Leathers officiating.  Interment will follow in the Holly Cemetery.  Visitation for Joyce will be held Sunday, December 2, 2018 from 3:00 p.m. until 7:00 p.m. at Valley Memorial Funeral Chapel in Lamar.

Joyce Colene (Hartshorn) Davis was born on November 5, 1927, in Ford, Kansas, to Wallace E. and Edna Grace (Stwalley) Hartshorn.  She passed away November 27, 2018, at Memorial Hospital in Colorado Springs at the age of 91. 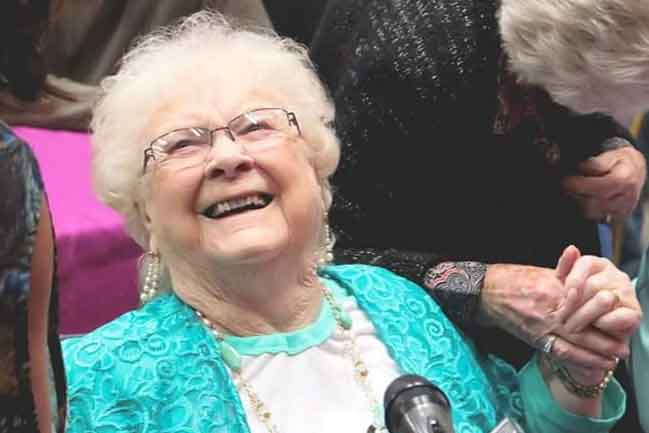 Joyce and her nine siblings grew up on a farm that was one mile east of Holly.  Joyce, being the oldest, learned to become a second mother to her younger siblings.  She helped with cooking, laundry, canning, babysitting, and much more. Joyce graduated from Holly School.

Joyce worked for her father at his implement dealership. She was the bookkeeper for her husband, Bill's, business, and spent many years as a bank teller at both the Bank and Credit Union in Holly. Joyce also help her sons in their pharmacy's however she could.

Joyce is survived by her children, Thomas (Cathy) Davis of Eads, Jerry (Peggy) of Ordway, and Christy (Mark) Dobrovolny of Lamar; siblings, Pat Daniels, Ramona Carnes, Kay (Eldon) Frey, and Dianna (Bruce) Ham; 12 grandchildren; 22 great grandchildren; one great great grandchild; special friends, Tracy and Glenn Smith and family; numerous nieces and nephews as well as many other relatives and a host of friends.

She was preceded in death by her parents; husband, Bill in January of 2004; and siblings, Bud, Babe, Max, Donnie, and Linda Rose.

Funeral arrangements are under the direction of Valley Memorial Funeral Chapel.