Lamar Community College's Beta Eta Gamma chapter of the Phi Theta Kappa Honor Society welcomed 30 new members in an induction ceremony on March 26, 2018.  This is one of the largest classes of new members, as the Chapter celebrates its twentieth year at LCC. 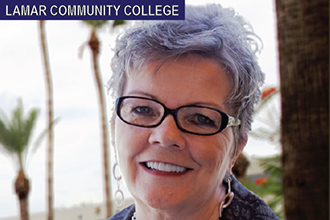 Cash, an Agriculture instructor and Department Chair at LCC, shared his own passion for education and the pursuit of excellence in whatever you choose to do in life.  He encouraged the inductees to be always interested in learning more, no matter where they are or what they are doing.

Phi Theta Kappa is an international scholastic honor society with a two-fold mission: to recognize and encourage the academic achievement of two-year college students and to provide opportunities for individual growth and development through participation in honors, leadership, service and fellowship programming.  Founded in 1910, it is the oldest and largest academic honor society of its kind.

The Beta Eta Gamma chapter of Phi Theta Kappa promotes and honors academic excellence at LCC and is active on campus.

To be eligible to become a member, students must have a 3.5 grade-point average after completing 12 or more credit hours of college-level work, be currently enrolled, and pursuing an AA, AS, AGS or AAS degree.  Phi Theta Kappa members are eligible to apply for millions of dollars in scholarships each year, as well as gain leadership skills and network with other high achieving college students.  Induction of new members occurs every fall and spring semester.