Temperatures were once again above average for the majority of Wyoming for the week ending August 21, 2022, according to the Mountain Regional Field Office of the National Agricultural Statistics Service, USDA.

Some areas of northwestern Wyoming saw temperatures as much as 5 degrees above normal. In portions of the southeast, however, temperatures were at or only slightly below normal. The week brought mostly below average levels of precipitation. Many areas saw rainfall amounts at or near zero to 0.10 inches. Isolated portions of the southwest, central, and far eastern Wyoming saw precipitation levels of about 0.25 to 0.55 inches of rain.

According to the US Drought Monitor for August 18, 2022, drought conditions improved. The amount of land rated drought free increased to 9.9 percent, compared to 7.5 percent the previous week. Conditions were rated abnormally dry in 35.3 percent of the State, up 5.5 percentage points from last week's 29.8 percent. Moderate drought was found in 33.6 percent of Wyoming, down slightly from 34.7 percent last week. Severe drought fell to 19.6 percent, compared to 22.5 percent last week. Extreme drought was found in only 1.6 percent of the State, compared to 5.5 percent the previous week. 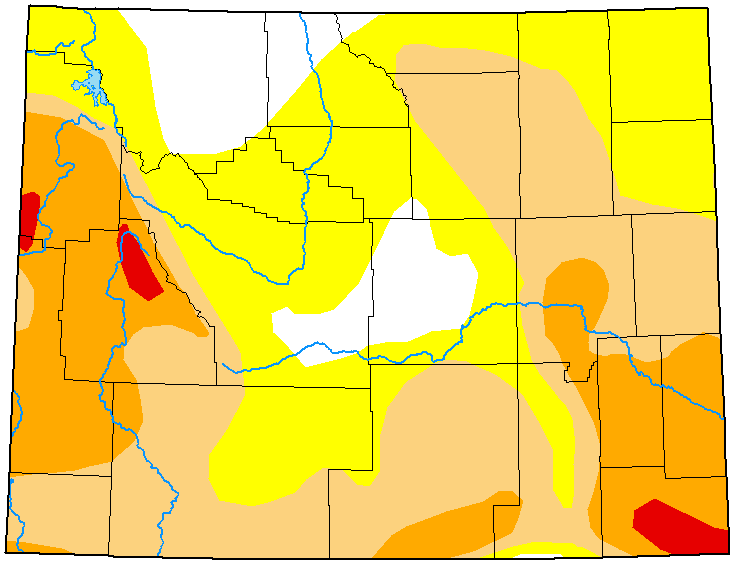 There was thunderstorm activity in Lincoln County, but more moisture was needed. Nights were getting cold with frost expected at any time.

In Goshen County, rains were a boost to farmers prospects for planting winter wheat in the upcoming weeks. The Goshen Hole area remained dry.