Temperatures and precipitation varied across Wyoming for the week ending August 7, 2022, according to the Mountain Regional Field Office of the National Agricultural Statistics Service, USDA.

Temperatures ran above normal for most of the southern and eastern portions of the state. Temperatures were much as 5 degrees above average in extreme parts of eastern Wyoming. Western and northwestern areas, however, saw temperatures slightly below average.

Precipitation levels were below average in the southeastern third of the state. Moisture levels were higher for the remainder of Wyoming. Many areas of the north and west saw precipitation levels averaging about 0.45 inches. Levels were even higher in the far west. Parts of Lincoln, Sublette, and Teton, Counties received as much as 1.8 inches of rain.

There was no improvement to drought conditions. According to the United States Drought Monitor for August 4, 2022, the amount of land that was drought free fell to 6.3 percent, compared to 10.4 percent last week. The amount of land rated as abnormally dry increased to 30.8 percent, compared to 26.7 percent last week. Moderate drought was found in 37.9 percent of the state, unchanged from last week. Severe and extreme drought conditions were also unchanged from the previous week, sitting at 17.9 and 7.1 percent of the State, respectively. 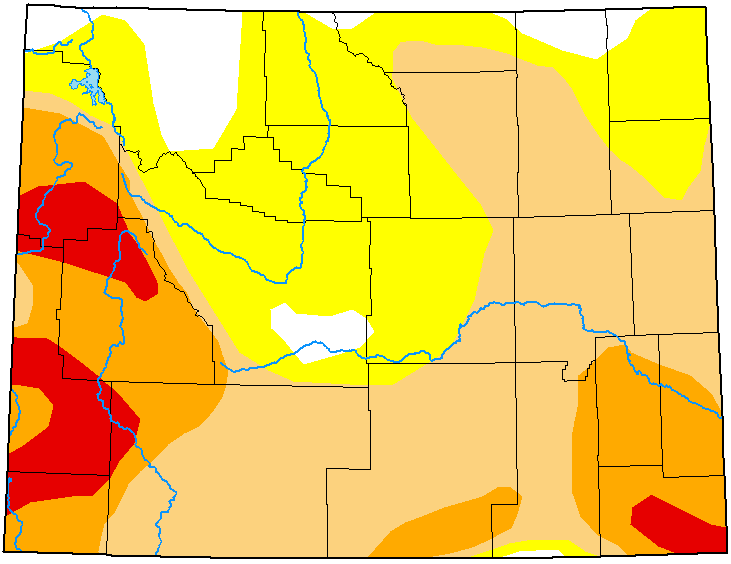 The warm conditions caused algae bloom in portions of the County.

In Goshen County the high temperatures and dryness continued. Because pastures were in poor condition, calves would be weaned earlier than usual.

A report from Lincoln County indicated the dry conditions were followed by a strong thunderstorm at the end of the week. The storm put down an inch of rain and helped alleviate the drought in the area.