EarthTalk – Is now a good time to buy an electric vehicle?

Dear EarthTalk: I'm getting ready to join the electric car revolution now that my old clunker is getting on in age. What's the latest and greatest? And is now a good time to buy an EV? -- Doug Ellis, Sacramento, CA

Hybrid-electric cars have become more and more common on American roads since the Prius launched here in 2001. Now fully electric vehicles (EVs) are finally coming of age thanks to innovations by Tesla, Nissan, BMW, General Motors and others.

It is not uncommon today to see a zippy little Nissan Leaf or a stately Tesla Model X silently waiting for the light to turn green next to you at an intersection. Believe it or not, some 21 different automakers now have some form of EV for sale in the U.S. And they have big plans--think SUVs--to raise the EV stakes over the next few years, beginning with a raft of new models slated for release in 2019. 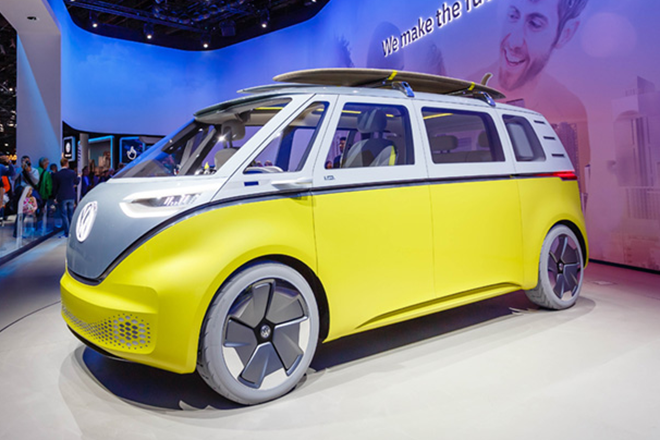 Fans of electric vehicles (EVs) can't wait for Volkswagen's prototype I.D. Buzz -- an all-electric revamp on the iconic VW bus -- to become a production model within the next couple of years. Credit: Marco Verch, FlickrCC.

Perhaps the biggest new player on the EV scene is Audi. The German company's new e-tron Quattro SUV can drive for roughly 250 miles between charges and features a styling equivalent to Audi's luxe gasoline cars. It will be unveiled later in the fall, and American consumers can expect to shell out some $80,000 for a new one. A smaller model, the e-tron Sportback, will ride on the same platform--and get a similar range rating--but will sport a zippier ride and a lower price tag (around $50,000).

On the cuter end of the spectrum, BMW will make an all-electric version of its iconic revamp of the Mini Cooper-- the "Mini E"--in 2019. The car will get upwards of 200 miles per charge, and with a price tag around $36,000 will compete directly against the Tesla 3 for customers looking to spend on the lower end for an EV.

Another big emerging EV player is Volkswagen, which is hoping to clean up its reputation after the big emissions cheating scandal that cost the company $30 billion in fines and settlements. By slashing production costs, VW expects to make and sell some of the lowest cost EVs around, with four new models (two crossovers, a hatchback and a sedan) available in 2019 in the vicinity of $35,000.

Of course, Tesla is poised for a big year, having worked out some production issues on its new Model 3 line and settled its financial differences with the SEC (following separate $20 million penalties to both CEO Elon Musk and Tesla the corporate entity). Customers have had to wait upwards of six months to get a new Model 3 once they sign on the dotted line, but Tesla hopes to eliminate the lag time in 2019 and rocket ahead of its competitors in the electric car space.

And yes, now may be the best time ever to buy an EV, given the profusion of advanced and now finally lower cost choices and the fact that there is still a federal tax credit of between $2,500 and $7,500 for doing so (depending on the size of the vehicle in question and its battery). Also, several states offer their own incentives to pile on the reasons to go electric now. That said, these incentives could expire or get cancelled depending on the political winds, so get it while you can.