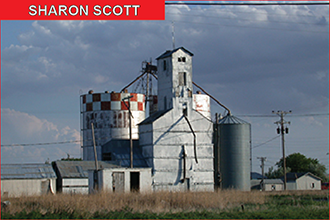 Received some news after the deadline last week, so will start this week's article with it.

Last weekend, Cheri Hopkins and family hosted her brothers and their spouses for a Schlabaugh family reunion.  On Saturday, her three brothers and wives, along with Lu Schlabaugh, enjoyed a day and evening of fun and visiting.  On Sunday, two cousins and their spouses joined the group for a noon meal and more visiting.  They wrapped up the afternoon with pictures of the group taken by photographer, Sheryl Crotinger.  The cousins left Sunday afternoon and the rest of the family enjoyed more visiting and reminiscing Sunday evening.  On Monday, everyone departed except one brother and his wife.  Cheri took them on a field trip, looking at crops and dodging tumbleweeds.  They also visited Christy in Tribune.  They left Tuesday morning. Those in attendance were:  Larry and Patti Schlabaugh of Lake Ozark, MO; Gary and Margaret Schlabaugh of Anchorage, AK; Terry and Joanna Schlabaugh of Virginia Beach, VA; Lu Schlabaugh of Arvada, CO; Jim and Kathy Schlabaugh of Delores, CO; Dan and Jill Riggin of Broomfield, CO; Evan, Jen, Layton, Julia, and Lincoln Hopkins and Christy Hopkins.

Our communities would like to extend their condolences to the family of Etha Mae (Barr) Martinson, who passed away Sunday.  Etha was the daughter of the late Slim and Waneta Barr and lived in Sheridan Lake while growing up.

Larry and Judy Tuttle traveled to Nashville, Indiana this past week to spend time with their daughter Kim, son-in-law Tim and granddaughter McKenzie.  They had a great time.

Ron and Lori Healy had a nephew, Richard Sweatland and family visit them over the weekend.

Brandy Blanton and her daughter Avery of San Antonio, TX spent a couple of days visiting her mom Sabrina and brother Brock and family in Wiley.  She came to Sheridan Lake on Saturday to visit with her dad, Greg Shalberg,  grandparents, Merle and Carol Shalberg and her Aunt Lori Shalberg.  She flew back home on Sunday.

Happy Birthday to both of you!

Denis, Theresa and Jerry Weber went to Denver last week to help Denis and Theresa's  great-grandson Josiah Wately celebrate his 3rd birthday.  Happy Happy Birthday Josiah!  Their daughter, Kathy Knutson's son Jordan surprised everyone at the party by showing up. He lives and works in Japan and was taking some vacation time to come and visit family and friends.

The Plainview Hawk football team, cheerleaders, coaches and several parents traveled to Hugo to watch the team play football at their Homecoming on Saturday.  The half time activities consisted of the presentation of the candidates for King and Queen.  The candidate chosen Queen arrived on the field, via a helicopter.  This was a first for many of us to observe.  After the game, the Plainview Hawks were treated to a meal by the Hugo, Genoa, Karval fans.  This was extremely nice of them and the boys really enjoyed it.

The Plainview Hawks were surprised when they arrived in Hugo and their coach, Matthew Biszak was there to greet them and coach them during the game.  Matt had been in Denver all week with his fiancee, Elizabeth Moore, who is in Swedish Hospital recovering from an accident she and Matt were in last week.  Matt is doing fine and Elizabeth is improving every day.  Hope you both are home soon.

Have a good week!!