Keeping in step with Punxsutawney Phil's prediction of six more weeks of winter, a blast of Arctic air will sweep through the Central states in the coming days. The frigid weather will usher in the lowest temperatures of the season so far, and it will turn cold enough to pose dangers to Americans spending time outdoors.

Mild weather ahead of the bitter cold may add a bit of shock value. Temperatures trended upward over parts of the Rockies and Plains on Tuesday, and milder air pushed eastward through midweek. However, AccuWeather meteorologists warn that Arctic air is on the move across central Canada, and there are no weather features to stop it from sweeping across a large part of the central United States.

After highs near 40 on Wednesday in Des Moines, Iowa, the mercury may top out at only 6 F on Sunday. The arrival of Arctic air on Thursday in the Midwestern city, caused temperatures to plummet, snow to fly and road conditions to deteriorate rapidly.

"The press of Arctic air will coincide with a large southward lunge of the jet stream associated with a break-off lobe of the polar vortex and should give the frigid weather a free ride into much of the Central states starting late this week," AccuWeather Senior Meteorologist Brett Anderson explained, adding, "Reinforcing waves of cold air will arrive through at least the first part of next week." 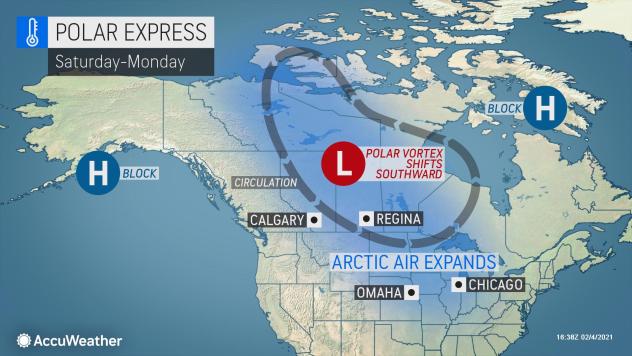 Even winter-hardy, long-time residents of the northern Plains and Midwest may mind the upcoming weather as temperatures much of the winter have been well above average. Since Dec. 1, temperatures have averaged 3 to 6 degrees Fahrenheit above normal over the region.

AccuWeather forecasters are calling for temperatures to dip a dozen or more degrees below average for several days. The extreme temperature departures will be more notable since early February is just past when average temperatures are at the lowest points of the season in many places.

In Chicago, the lowest temperature recorded so far this season was 8 F, which occurred on Christmas morning and again on Jan. 28. Temperatures are forecast to dip well below zero during several nights in the upcoming cold pattern. 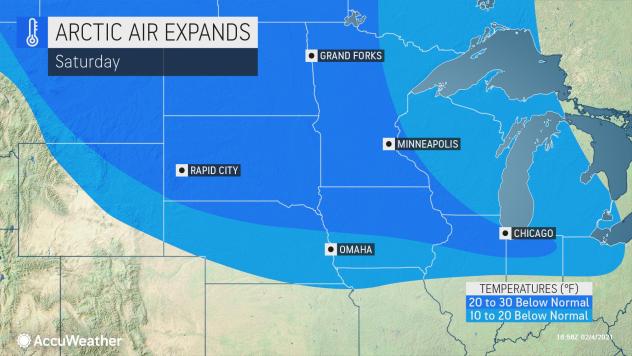 "Even though the setup may fail to break many official low temperature records, temperatures departures of 30 and even 40 degrees Fahrenheit below average are quite possible with the Arctic blast and that in itself can be quite painful for the dead of winter," AccuWeather Meteorologist Nichole LoBiondo said. 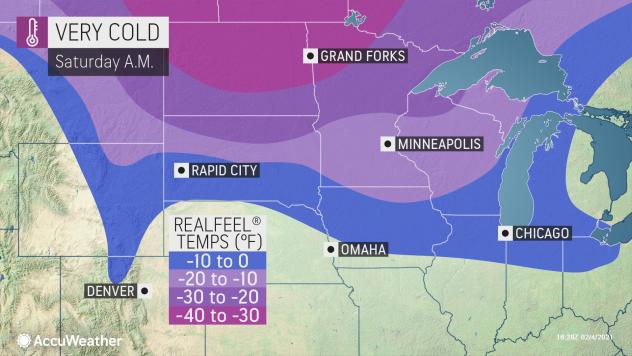 Sunday will likely be the harshest day during the upcoming stretch in Chicago. Both the daily record low and lowest high temperature may be in jeopardy. The high on Sunday is predicted to be in the single digits, around 7 F. However, if the mercury fails to reach zero, that would constitute quite a feat, forecasters say. Subzero high temperatures are not unprecedented in early February, though they are rare. The temperature reached only zero degrees on Feb. 7, way back in 1893. The record low on Sunday of 10 below zero was set in 1875.

In Minneapolis, nighttime temperatures are forecast to dip below zero for seven consecutive nights from Friday night through Thursday night of next week. Multiple nights of double-digit below-zero temperatures are possible. The coldest night is forecast to be Saturday night in the Twin Cities. Temperatures are expected to bottom out around 14 below zero. The record low for Saturday night is 24 degrees below zero, which has stood since 1936 and isn't likely to be broken amid the frigid weather this month. Prior to the upcoming Arctic outbreak, the coldest it has been in the Twin Cities this winter was 5 below zero on Christmas morning. 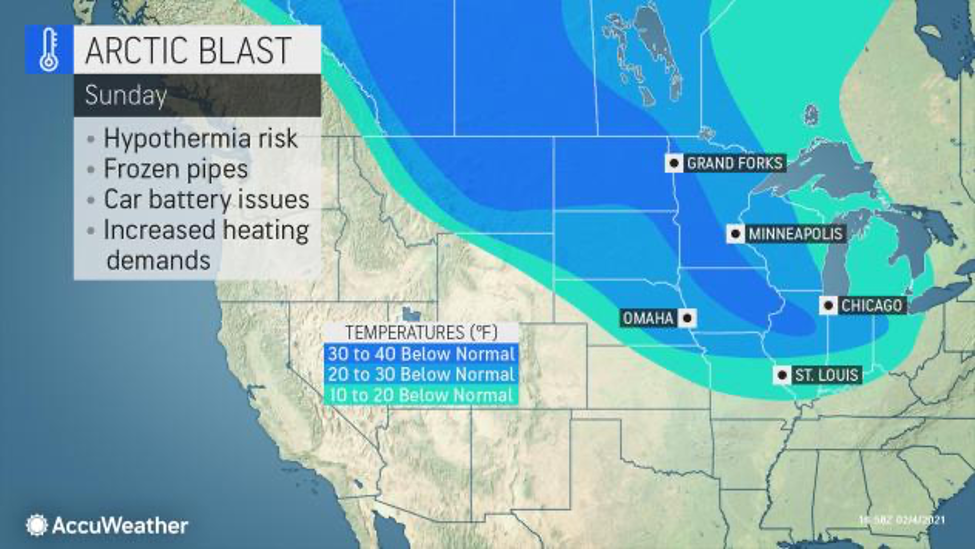 Gusty winds will accompany the first surge of Arctic air from Friday to Saturday and will create dangerous AccuWeather RealFeel(r) Temperatures. Wind will generally gust to 20 to 40 mph across the northern Plains, Great Lakes and Ohio Valley.

The strongest winds with gusts between 40 mph and 60 mph around the Great Lakes will occur on the back side of a storm that is expected to drop snow, a wintry mix and rain into Friday evening over the Northeast.

Blustery conditions will linger on into Saturday from portions of the northern Plains to the Great Lakes region in the storm's wake. Even as winds ease up a bit on Sunday, the breeze will be brutal. AccuWeather RealFeel(r) Temperatures can dip to 15 degrees to 30 degrees lower than the actual temperature at times.

"Hypothermia and frostbite are serious threats in this type of air mass, especially with strong winds blowing or when people are trying to walk or jog at a brisk pace in light winds," LoBiondo said.

"People will need to put on extra layers of clothes if they plan on walking out the door to brave the elements," she added.

As if the cold was not enough, snow will also be a threat in some locations. Weak storms with swaths of accumulating snow will travel from the northern Rockies, dip across the central Pains and swing through the Midwest in the frigid pattern. 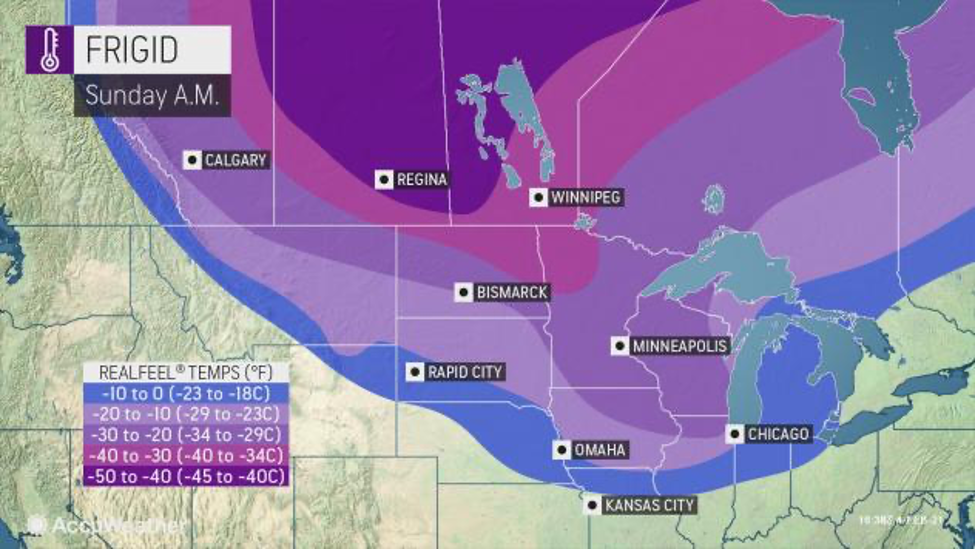 "As Arctic air surges into the northern U.S., the cold air passing over the Great Lakes will produce lake-effect snow over the eastern and southern areas adjacent to the lakes," said AccuWeather Meteorologist Adam Sadvary.

With the aforementioned blustery conditions, there will be other potential hazards outside of the cold and lake-effect snow.

"Strong, potentially damaging winds from the west can also be an issue, especially for those near the lakeshore," Sadvary cautioned, adding, "Coastal flooding and ice buildup will be possible."

Given that temperatures up until now have been consistently above normal this winter, there is very little ice cover on the Great Lakes. Although the percentage of ice coverage has increased in recent days, it is still far below the typical amount of ice in early February.

In some years, Lake Erie, the shallowest of the Great Lakes, is completely frozen over at this point of the winter. As of Feb. 3, less than 20% of Erie has ice on it. 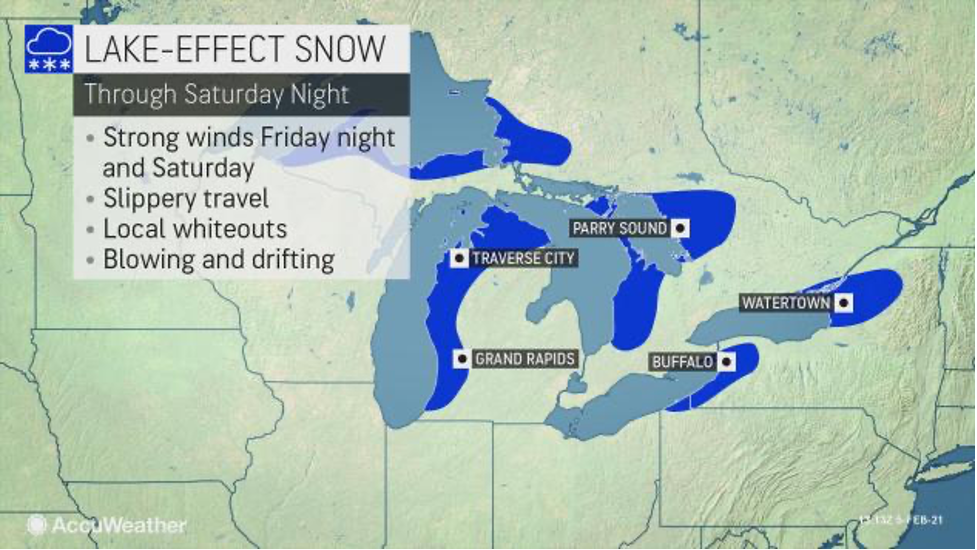 Therefore, while lake-effect snow normally becomes less common during the middle to latter part of the winter, that is not the case this year.

"Following a mild start to the winter season, lake ice coverage is currently low, which allows the transfer of more moisture from the lakes to the atmosphere to continue to develop snow bands as cold air passes over the lake water," Sadvary explained.

Much colder air is also forecast to spill into the Eastern states. However, the coldest air may get bottled up over the Central states and have difficulty climbing over the Appalachians and toward the Eastern Seaboard.

Temperatures could tumble below the lowest measured temperatures of the season in these cities and across other locations of the East, but it may take until the end of next week or the following weekend to do so. It appears that near- or below-zero readings are most likely across northern New England and the traditional cold spots of the central Appalachians.

The temperature contrast zone that results can pave the way for one or more storms on the Atlantic coast in the coming days, and AccuWeather meteorologists will continue to monitor that potential.

Russia’s withdrawal from the International...