Red flag warnings for high fire danger are in place through Friday evening for areas of eastern and western Colorado.

In eastern Colorado, the warning is expected to continue through 8:00 p.m. Central Las Animas and eastern Huerfano and under the warning, along with all or most of Pueblo, Fremont, Chaffee, Lake, El Paso, Lincoln, Elbert, Douglas, Arapahoe, Jefferson, Adams and Denver counties. Smaller areas of Park, Gilpin and Clear Creek counties are also covered by the warning.

On the western slope, portions of La Plata, Montezuma, Dolores, San Miguel, Montrose, Delta, Mesa and Ouray counties are under a warning until 9:00 p.m. 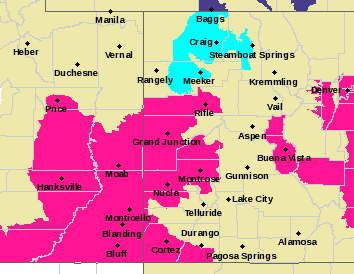 Fall weather is also rapidly approaching. Portions of Moffat, Routt and Rio Blanco counties are under a freeze watch from midnight Friday into late Saturday morning. Temperatures in the area are predicted to be at or below freezing, with some areas potentially seeing temperatures drop to the mid-20s.

Outdoor activities that could cause a fire, such as campfires, burning trash, agricultural burning and welding, are strongly discouraged during red flag warnings.