The History of Railroad Construction in America 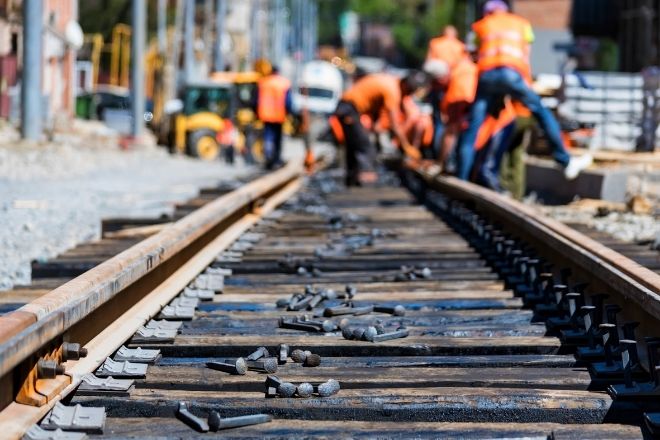 Even if you exclusively travel by car today, none of us would be where we are now without railroads. The development of rail travel for freight and passenger operations led to the meteoric rise of the United States at the turn of the 20th century. Though our love of the rails has waned, the history of railroad construction in America is a long story that continues to this day.

Railways helped Great Britain's Industrial Revolution take hold, and Americans took as many cues from British rail as possible as the 19th century began. The specifications of early railroads were based not on steam engines, but animal-powered locomotion. By the middle of the century, railroads had supplanted rivers and canals for freight shipping, changing the population patterns of the United States in the process.

The Golden Age of Rail

The second half of the 19th century represented the rapid growth of railroads in the US. On May 10th, 1869, railroad workers drove the "golden spike" at Promontory, Utah, completing North America's first transcontinental railroad, linking the west and east coasts with faster travel than ever before. Legendary captains of industry such as J.P. Morgan and the Vanderbilts owe their fortunes to the fast-expanding rail industry. By 1916, the American rail network counted over 254,000 miles of track.

The institution of the Interstate Highway System brought America's love affair with the automobile to a fever pitch, while the proliferation of low-cost airlines transformed air travel from a grand luxury to a coach bus in the sky. The biggest casualty of these two developments was American passenger rail, with freight rail losing ground to overland trucking as well. With less of a demand for travel and shipping via rail, America's rail network fell into decline. Railroads, once among America's greatest sources of wealth, dropped like flies into bankruptcy, with public agencies scooping up assets in a bid to sustain commuter rail operations around major cities such as New York, Chicago, and Philadelphia. As railroads saw less service, much of their trackage went unmaintained, with miles worth of trackage taken out of service as part of the popular "rails to trails" program.

Restoring the country's crumbling infrastructure is a daunting but necessary goal of the federal government in 2021. While our surface roads, bridges, and airports all require attention, our railroad system, once the pride of the world, needs serious attention to return to its prior glory. Construction firms whose arsenals of heavy machinery allow them to specialize in rail work are expected to bid on the numerous public and private projects that will replace, extend, and modernize our far-reaching rail network. As the Green New Deal encourages us to burn less jet fuel and explore sustainable transportation technology such as hydrogen-cell locomotives, the history of railroad construction in America may begin to add exciting new chapters following its brief intermission.