NOTE: I am reviewing this film because of its convenient Video On Demand availability following a theatrical run in January. I fully acknowledge and respect the decision to close most of the theaters in the country due to COVID-19. Stay safe, everybody.

I was so glad when I didn't have to review "Dolittle" back in January. I went on vacation for two weekends and wrote two Oscars articles to run in place of the regular reviews. During that time, "Dolittle" performed well enough at the box office to justify a review even though the film was ravaged by critics. At the time I heaved a sigh of relief that I had dodged a bullet. But the halting of new releases has led me to retroactively take a look at the film, the first I've ever reviewed through an On Demand service (I saw "Bloodshot" and "The Hunt" in theaters before the mass closings). And I have to say, maybe because I watched the film comfortably from home, maybe because other critics lowered my expectations so much that the film had an easy bar to clear, or maybe because I've given "D" grades to the last two movies I reviewed and I don't feel like getting incensed a third week in a row, but I didn't think the movie was that bad. 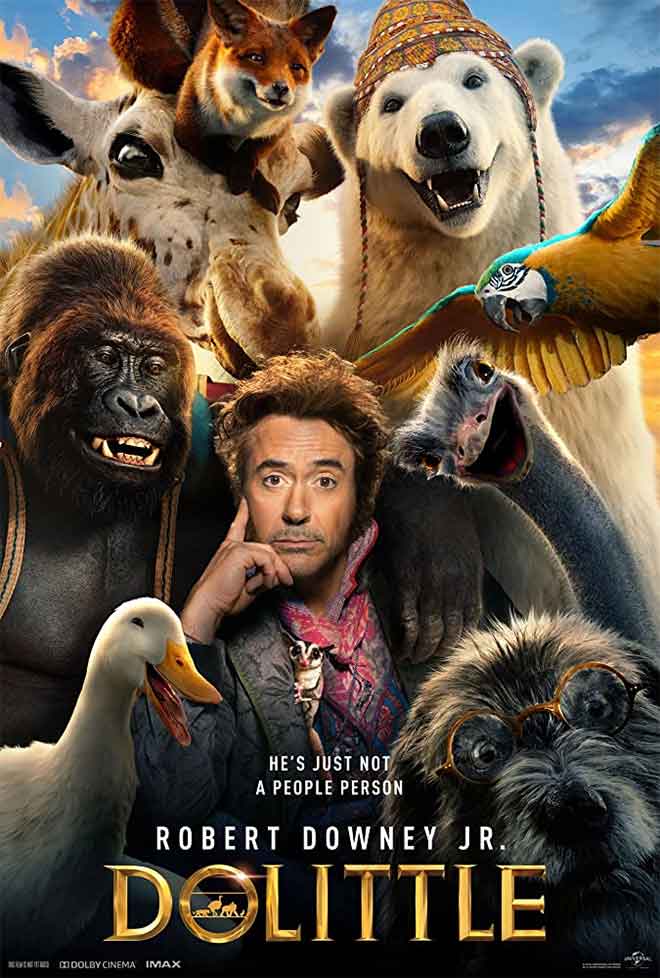 Other humans have been banned from the sanctuary for years following the death of Dolittle's wife, but one day the boundary is broken twice within minutes of one another. Stubbins (Harry Collett) has accidentally shot a squirrel named Kevin (Craig Robinson) and takes an immediate shine to the prickly Dolittle's methods. He instantly yearns to become his apprentice. Lady Rose (Carmel Laniado) summons Dolittle on behalf of Queen Victoria, who has been poisoned and can only be saved with a plant from an island that Dolittle's wife had charted. If she dies, Dolittle and his friends could lose the sanctuary... in the middle of hunting season.

The rest of the film sees Dolittle, Stubbins, and their animal crew journeying to a mysterious island to retrieve the elusive plant. They have a stopover at a pirate island, where the king (Antonio Banderas) holds a grudge against Dolittle and wants to feed him to his pet tiger (Ralph Fiennes). They have to evade Mudfly (Michael Sheen), a rival of Dolittle's who has been tasked by a villainous chairman (Jim Broadbent) to make sure the good doctor never returns. And they have to confront a dragon (Frances de la Tour) who is angry and aggressive, mostly because she's sick. I had been so thoroughly prepared to be disgusted by a scene where the team performs an invasive procedure on the dragon that when the scene finally came, I was barely bothered. But know that the scene is there and it's potentially bothersome.

Don't get me wrong, I'm not recommending this movie. Downey can never decide what accent the doctor should have (tell me he didn't leave the MCU to take more roles like this). The storylines with the humans are never compelling. And perhaps worst of all, the humor is lowbrow and annoying (I like 1998's "Rush Hour," but I can't stand "that" line). But I'll admit that the sweet scenes, especially ones involving the bond between the animals, did keep the film bearable for me. "Dolittle" should be considered a low priority for home viewing, but we're in an era where you can quickly go through all your highest priorities, so maybe this film can get a moment to shine.

"Dolittle" is rated PG for some action, rude humor, and brief language. Its running time is 101 minutes.

Contact Bob Garver at rrg251@nyu.edu. And visit www.bobatthemovies.com for a chance to recommend movies for me to review between now and the time theaters reopen.