NOTE: I am reviewing this film because of its recent Video On Demand release following a brief theatrical run. I fully acknowledge and respect the decision to close most of the theaters in the country due to COVID-19. Stay safe, everybody.

"The Hunt" found itself in a whirlwind of controversy last year when President Trump indirectly said that the film was "made in order to inflame and cause chaos" in the midst of mass shootings in Dayton and El Paso. While "Joker" opened in spite of similar controversy and was rewarded with over $300 million at the domestic box office and an Oscar for Joaquin Phoenix, "The Hunt" was taken off the shelf for six months. Many speculated that this was done so as not to appear insensitive to the victims of the recent shootings, while others insisted that it was Universal heads caving to political pressure. My theory, even at the time, was that Universal wanted to turn this into a "forbidden" film that The Man wanted to keep from audiences, so anyone who wants to see it can feel like an antiestablishment independent thinker. What they turned it into is an ignorable afterthought that failed to capitalize on unsolicited free publicity, which is fine because now the film can bomb on its own merits. 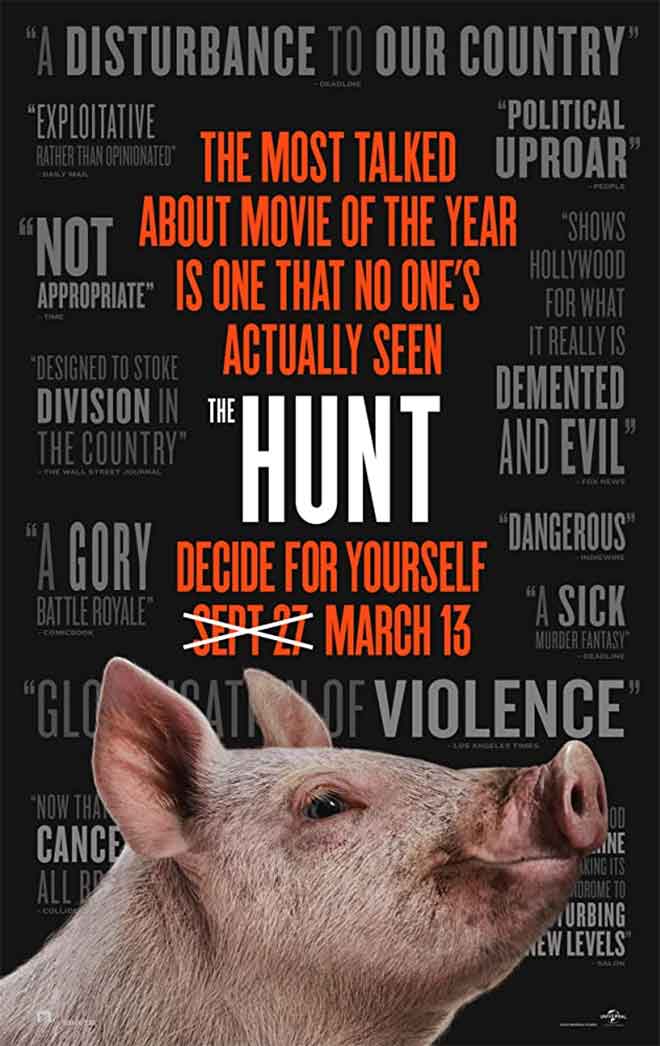 After an unnecessary prologue that somewhat spoils the mystique of the film's villains, we're introduced to the film's heroes. Eleven people wake up in a wooded area in the middle of nowhere. They've been gagged with devices that, to the movie's credit, actually look capable of gagging people, as opposed to the flimsy bits of tape and cloth I see in other movies. They're allowed to remove the gags and arm themselves with a cache of weapons nearby. Then they start getting picked off with bullets, explosives, and booby traps. There's a flurry of violence for the next ten minutes, and it goes by so quickly that over half the field doesn't get the chance to understand what exactly is happening to them or why. Supposedly there's a lesson being taught, but this movie favors gory death scenes over the logic of keeping its characters alive long enough to comprehend the consequences of their actions.

"Name" actors playing hunted prisoners include Ike Barinholtz, Betty Gilpin, Justin Hartley, Emma Roberts, Sturgill Simpson, and Ethan Suplee. Don't get too attached to most of them. Actors playing hunters include Reed Birney, Glenn Howerton, Amy Madigan, and Hilary Swank. I will say that the film saves Oscar-winner Swank for the third act, treating her like a surprise, though as far as I can tell, her name has come up in all the film's advertising.

What seemingly has everybody up in arms is that the prisoner characters are generally conservative stereotypes and the hunter characters are generally liberal stereotypes, so to the untrained eye, the film seems to celebrate liberals killing conservatives. But no, it just celebrates killing in general, and it stops to make cheap jokes about both liberals and conservatives along the way. Liberals are obsessed with organic food and political correctness, conservatives are poorly-educated gun nuts. That's the level of socio-political commentary with this movie, don't bother thinking about it more than the writers did.

"The Hunt" is such a lousy movie that there's a "Kill Bill"-inspired kitchen fight at the end, and I was bored all the way through it because I was so uninvested in both characters. This movie is completely disposable and deserves to be avoided, not because it's "dangerous," but merely because it's garbage. As for its out-of-left-field "moral" about being careful what you say online, I take it about as seriously as the rest of the movie, but maybe I'll get lucky here: The makers of "The Hunt" are going to send me a check for $10 million, I'm sure of it!

"The Hunt" is now available on Video On Demand. The film is rated R for strong bloody violence, and language throughout. Its running time is 90 minutes.

Recreational marijuana on Missouri ballot in...