With "Onward," one streak was going to come to an end. In one corner was Pixar, who after 25 years of making consistently impressive animated films, might finally release a bad one. In the other corner was 2020, which after two months had yet to see the release of a single film I'd recommend (not even this weekend's well-reviewed "The Invisible Man," whose high praise I don't understand). The two went to battle, and as I predicted, Pixar scored a first-round knockout. This film is smart, touching, and of course fun - everything I expect from Pixar and miss in other movies, especially this year. 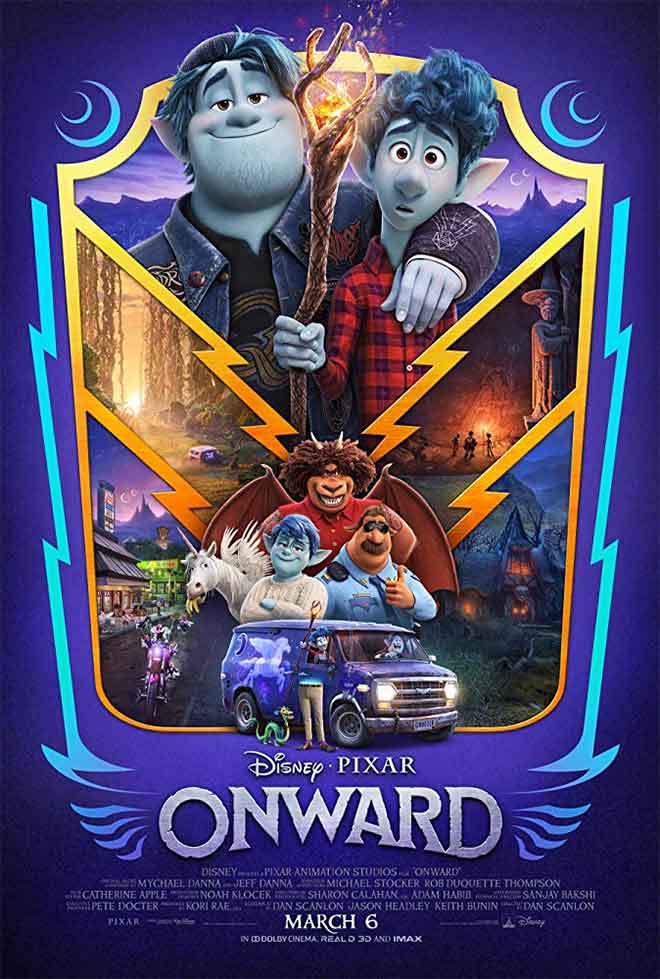 The film takes place in a world of elves and pixies and other magical creatures. A long time ago it contained magic, but the spells proved dangerous and difficult, so technology was invented for those with no magic in them. As a result, the world now looks like ours, save for the beings that inhabit it and a few adjustments to accommodate their shapes and sizes. The magic has almost disappeared, though a few folks want to preserve it for use in emergencies. I was worried that the movie wouldn't be able to get me invested in this fantastical world (the way some people complain that they can't get drawn into the weird world of "Cars"), but the opening moments effectively establish its identity.

Ian (Tom Holland) and Barley (Chris Pratt) are a pair of elf brothers who live with their mother (Julia Louis-Dreyfus). Ian living with is mother is expected, as he's just a teenager, but Barley is an adult who just isn't driven to move out. He has other priorities, like protecting local magical landmarks, playing fantasy board games, and driving around in his junker of a van. The brothers' father died when Barley was very young and Ian wasn't even born, so Ian has had to grow up without a father figure, and big brother Barley doesn't count (or does he?).

On Ian's sixteenth birthday, the brothers get a long-dormant gift from their late father: a magic staff, complete with a rare gem that can be used to cast a spell to bring the father back for one day. Barley is inherently unfit for magic, but the meeker Ian has the ability to do it - he's just not very good at it, getting the spell to half-work by bringing back the bottom half of the father's body without the top half that can talk. The brothers have to go on a quest to get another gem, even though the business of both magic and adventuring are completely new to Ian. Their travels take them to a tavern run by a sellout manticore (Octavia Spencer), a gas station frequented by a rowdy gang of pixie bikers, on the run from their mother's well-meaning centaur cop boyfriend (Mel Rodriguez), and a host of other challenges, all while they have to keep tabs on their unintentionally half-absent father. And of course, they learn truths and lessons about each other and themselves along the way.

Before I get too carried away, I should pull back and say that "Onward" doesn't quite reach the upper echelon of Pixar's output. It can be sloppy at times, like with how magic is supposed to be really difficult in this world, yet Ian learns to master it over the course of 24 hours. Or how the big baddie at the end is a dragon, and this world hasn't established anything about dragons and their traits. Or how the mother and the manticore go on a side-quest that serves little purpose other than to remind us that these characters are in fact in the movie. But all those complaints melt away when I'm laughing harder in the first five minutes than I have at any whole movie in months, or when I'm audibly (and embarrassingly) gasping at a harrowing action sequence involving a bottomless pit. I charge you to go "Onward" to the theater and see this movie as soon as possible.

"Onward" is rated PG for action/peril and some mild thematic elements. Its running time is 102 minutes.