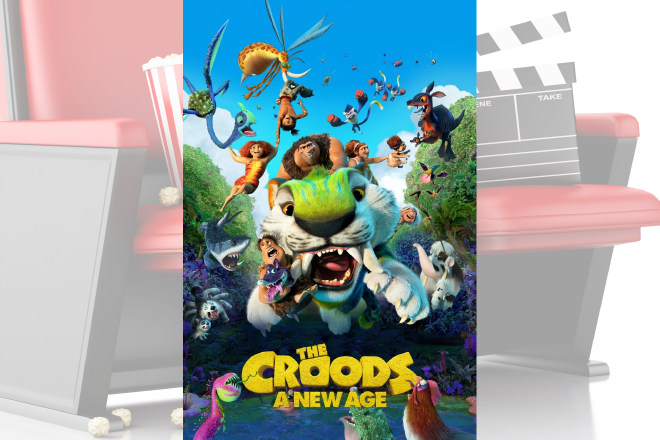 Going into "The Croods: A New Age," I barely remembered anything from "The Croods" from 2013. I remembered that Emma Stone, Nicolas Cage, Catherine Keener, and Cloris Leachman voiced cave people, but that was about it. I had even forgotten that Ryan Reynolds was in it, mainly because I had written Reynolds off as a box office draw prior to his 2016 resurgence in "Deadpool." Speaking of 2016, that was the year of "La La Land," which won Emma Stone an Oscar for Best Actress (the highest-profile announced win for that movie to stick). Two of the cast members have moved on to bigger and better things, but they were able to return and do this sequel. That's a win for the movie in and of itself. And aside from some pathetic box office domination during weekends where nothing else wanted to open, that's the only win this movie gets.

At the beginning of the film, the teenaged Eep (Stone) and Guy (Reynolds) are two crazy kids in love, which Eep's father Grug (Cage) reluctantly tolerates. Guy is enamored with Eep, but he hates having to sleep in a big clump with the rest of her family, which also includes Eep's mother Ugga (Keener), grandmother Gran (Leachman), brother Thunk (Clark Duke), younger sister Sandy (Kailey Crawford), and at least two animals. He wants to find a paradise called Tomorrow, where he and Eep can live in privacy. Grug, hard-headed as he is, wants Eep to stay with her pack and spend her days hunting, foraging, and barely surviving. Eep is torn between the two ideas, but it doesn't matter because there's no Tomorrow to tempt her, and there probably never will be.

The next morning, the family finds Tomorrow. It's a lush oasis filled with food, inhabited by an "advanced" family called the Bettermans, who knew Guy before he met the Croods. Father Phil (Peter Dinklage) and mother Hope (Leslie Mann) are eager to get Guy reacquainted with their daughter Dawn (Kelly Marie Tran) even though he already has a girlfriend in Eep. It turns out that it's Eep who is more excited to hang around with Dawn, since she's never been around a girl her own age. Eep takes Dawn on an adventure outside the walled compound, which Dawn loves as a contrast to her sheltered existence, but this does not sit well with the Bettermans. Actually, nothing about the primitive Croods sits well with the snobby Bettermans. Cultures are clashing, everyone's fighting, and Grug is eating the bananas that are supposed to be sacrificed to an army of Punch Monkeys (monkeys that punch everything). The monkeys decide to make sacrifices of the humans instead, setting in motion the action portion of the film.

The conflicts in this movie pan out so predictably. Is there any chance that the Croods and Bettermans won't be friends by the end of the movie? Or that Guy and Eep won't make up once their relationship is tested? Or that they won't ultimately make long-term decisions that manage to please everyone? No, all the movie's creativity went into the eye-candy action sequences and hybrid animals like Kangadillos and Piranhakeets. I'm sure these creatures were fun to invent, but clearly a disproportional amount of effort went into creating them for a series of two-second gags.

That's not to say that I don't like the action sequences and the crazy animals and some of the gags (never underestimate the power of a good eye-gouge). But there needs to be a better movie surrounding them, and this story is dull, dull, dull. I should be rooting for this movie to bomb against stronger competition, not begging for it to succeed so that something - anything - can keep the theaters in business. As it is, I'll recommend going to see "The Croods: A New Age" in theaters (following all safety protocols, of course) and checking your opinion against mine to see if you too think this movie is a piece of well-animated junk.

"The Croods: A New Age" is rated PG for peril, action, and rude humor. Its running time is 95 minutes.

What’s the difference between sugar,...