Movie Review - Death on the Nile 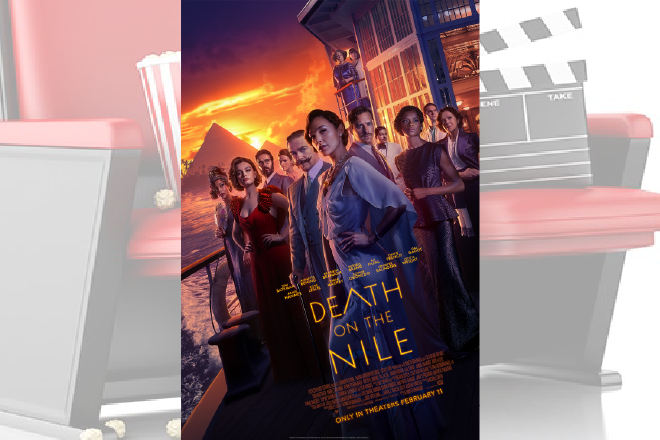 It is ironic that the #1 movie at the domestic box office on Valentine's weekend would be one where all but one relationship ends badly. If you are watching this movie with a partner, be sure to say something like, "Good thing we're not as screwed up as these people, right?" If your partner can't answer because they are too busy jotting down notes on how to plan the perfect murder, perhaps your relationship has run its course.

Following 2017's "Murder on the Orient Express," Kenneth Branagh is back as legendary Belgian detective Hercule Poirot. More importantly, Poirot's ridiculous mustache is back, complete with its own black-and-white origin story. It's almost, but not quite worth sitting through some lousy digital de-aging effects on Branagh to understand some of Poirot's motivations.

The bulk of the film takes place, in color, in 1937 Egypt. Poirot is on holiday when he spies old partner Bouc (Tom Bateman). Bouc introduces Poirot to his mother Euphemia (Annette Bening) and his recently-married friends Simon (Armie Hammer) and Linnet Doyle (Gal Gadot). The Doyles request Poirot's help in ridding them of stalker Jacqueline de Bellefort (Emma Mackey), an obsessed former lover of Simon's. Poirot can't do much since Jackie hasn't committed any crime, but he does suggest that the couple sneak away in secret. Misinterpreting Poirot's advice, the Doyles rent out a huge ocean liner and take their circle of friends (including Poirot) on a cruise down the Nile where they figure Jackie can't follow them. Jackie boards the boat at the very next stop. Murder follows. Frustratingly, the prime suspect has an airtight alibi - they were being detained for shooting another passenger at the time.

Perhaps it was another member of the party. There's Linnet's own jilted former lover Dr. Windlesham (Russell Brand, for once not looking like a pirate despite the movie largely taking place on a ship), her cousin and crooked estate manager Andrew (Ali Fazal), her Communist godmother Marie (Jennifer Saunders) and Marie's nurse Mrs. Bowers (Dawn French), scheming maid Louise (Rose Leslie), school chum Rosalie (Letitia Wright), and Rosalie's singer aunt Salome (Sophie Okonedo). Complicating matters is that Rosalie and Salome have stolen Bouc and Poirot's respective hearts. Which isn't to say that Bouc and his mother are necessarily off the hook. Some expensive diamonds are missing, that alone could be the motive behind the murder, and absolutely everyone could use the money.

The movie meanders in its early stages, no doubt trying to spend as much time as possible with the full cast before someone has to be eliminated. But then we get to the really fun part - Poirot's fast-paced interrogations. It is here where we get the film's wittiest dialogue and best chemistry between actors. I've heard it said that Hammer and Gadot have no chemistry as a couple, and I think that's a bit unfair, as public opinion of Hammer is very low right now due to accusations levelled against the actor, and I think people would be disgusted by him in any role, especially one as sensual as this. But it doesn't take a Poirot-level detective to see that the Simon/Linnet marriage isn't destined to last - assuming they both live long enough to split up.

Director-and-star Branagh is currently in Oscar contention for directing a semiautobiographical film called "Belfast." It probably won't make enough money to warrant its own review, but if did, I would give it an A- and name it one of the top two or three films of 2021. I definitely recommend seeing it instead of "Death on the Nile" if it's an option. This movie probably won't get nominated for any Oscars, but it at least manages to keep its head above water - the Nile, as it were.

"Death on the Nile" is rated PG-13 for violence, some bloody images and sexual material. Its running time is 127 minutes.