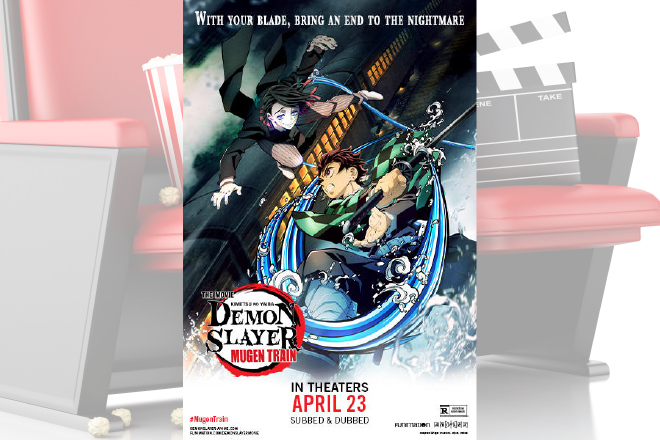 Here's a movie I didn't expect to be reviewing two weeks ago. I didn't know how this anime movie from a franchise unknown to me had managed to get such a plum positioning in theaters, but it was sure to lose to "Mortal Kombat" in its opening weekend and the horror movie "Separation" this past weekend. "Mortal Kombat" did indeed win the films' opening weekend - $23 million domestically to this film's $21 million, on twice as many screens. I have no doubt that this movie could have pulled a huge upset in just a few hundred more theaters. This past weekend, that upset occurred. Not just over "Separation" (I saw it, don't bother), but over "Mortal Kombat." "Demon Slayer: Mugen Train" is the #1 movie in the country.

It should be noted that I am not the best person to be reviewing this movie. I'm not a fan of anime in general. I think the animation invariably looks like some sort of rough draft that should have been cleaned up before the comic or cartoon was released. And again, I was not even remotely familiar with the "Demon Slayer" franchise before going into what is essentially "Demon Slayer: The Movie." I know that "Pokemon," "DragonballZ," and "Naruto" have huge fanbases and I wouldn't be surprised if a movie based on one of those was a hit, but to me, "Demon Slayer" came from out of nowhere and expected me to jump in somewhere in the middle.

From what I've been able to gather of the plot, the series follows Tanjiro (Natsuki Hanae) as he tries to avenge his family against the demons who killed most of them, save for his sister Nezuko (Akari Kito), who was turned into a demon and now has to travel around caged in a suitcase. He is assisted by his friends, the cowardly Zenitsu (Hiro Shimonu) and the headstrong Inosuke (Yoshitsugu Matsuoka). Inosuke, who wears the head of a boar as a mask as a tribute to the pack of boars that raised him, is clearly the most popular character in the franchise.

The movie sees the group hop on board a train so they can meet up with famed demon slayer Kyojuro (Satoshi Hino) and hopefully become his apprentices. Kyojuro is happy to take them on, as he is happy about everything in life. He expresses appreciation for each individual bite of food as he chows down. But the train is secretly under attack from wannabe demon Enmu (Daisuke Hirakawa), who wants to destroy our heroes' souls through his ability to trap them in good dreams. Tanjiro dreams he is back with his family and wants to stay there forever, but he's needed in a darker place.

The movie takes forever to get to its action sequences, and even when it does get to them, the characters' powers are so poorly defined that I could never be sure of who was winning. There's also a second antagonist who shows up later in the movie, and is very out of place in what had up to that point been a surprisingly tight-knit story. There's a battle sequence that is admittedly impressive, but keeps going after it appears to be over, then restarts after another false finish, then restarts again. After a while, I found myself unable to trust the movie to give me a finish at all.

I'm happy for "Demon Slayer: Mugen Train" for achieving its level of success. It's fun to see an occasional surprise at the box office, especially when the competition is so crummy. But this movie didn't manage to make me a fan of "Demon Slayer" and its pacing is all out of whack. Remember though, this opinion is coming from a non-fan of the entire anime genre. It is likelier than usual that opinions will differ from mine, especially for fans of the series.