There were things about 2013's "Frozen" that instantly made it a Disney classic: the spectacular ice-and-snow animation, the engaging princesses Anna (Kristen Bell) and Elsa (Idina Menzel), and of course, the rightfully iconic Oscar-winning musical number "Let It Go." And yet, the film only got Two and a Half Stars out of Five, the equivalent of a B-, from me. I certainly wasn't missing what other people were seeing in the film, but I did feel that I was seeing what other people were overlooking. Elsa's powers were poorly defined and at the mercy of the whims of the screenplay, one villain was introduced in about the laziest manner I'd ever seen and another seemingly turned heel just for the sake of turning heel, and the Rock Trolls... should have stayed rocks. 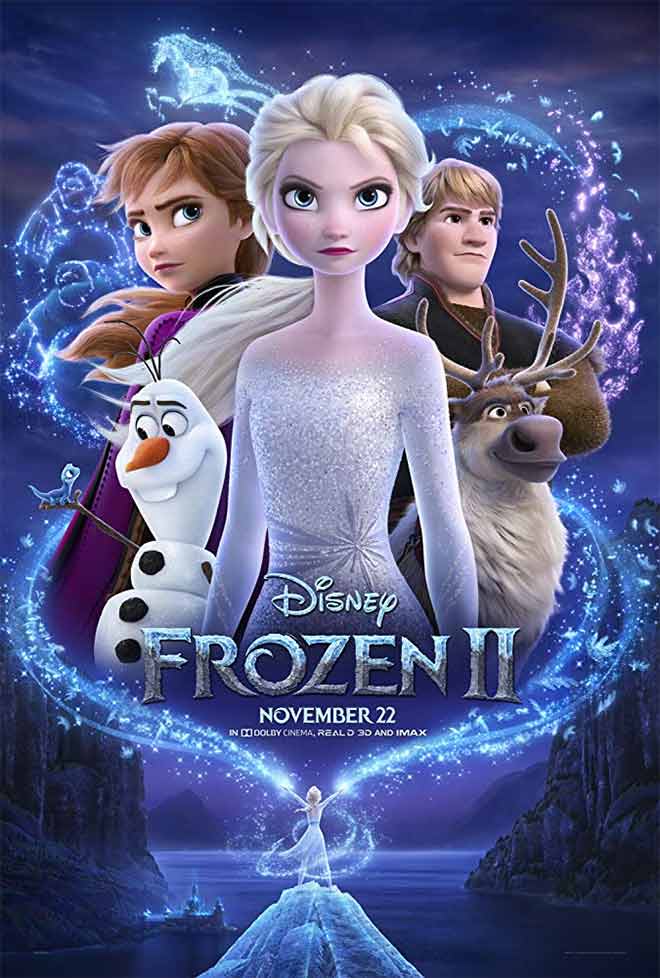 But over time, those detractions melted away. These days I have no problem mentioning the film alongside contemporaries like "Moana" and "Coco" that I felt nailed it from the very beginning. And it's with future hindsight in mind that I think I should see "Frozen II." Sure the movie still has a loose grasp on Elsa's powers, the third act is mostly magical hooey, several new characters have no need to exist, and a laughable cover of one of the standout songs by Panic! At The Disco plays over the credits. That doesn't mean that my takeaway isn't going to be the better-than-ever animation, the chemistry between the characters, the funny jokes, and the addictive songs that form the ice-ing on the cake.

The story sees Queen Elsa forced to evacuate the kingdom of Arendelle due to a disruption that has something to do with a sound that only she can hear. She gathers her sister Anna, Anna's ready-to-propose boyfriend Kristoff (Jonathan Groff), Kristoff's reindeer Sven, and eager snowman Olaf (Josh Gad, once again tiptoeing as close as he can to the precipice of Annoying without losing his footing), and the team investigates a long-forgotten forest that hosts a dam capable of wiping out Arendelle if it bursts. The forest also hosted a peace celebration gone wrong a few decades ago. The good news is that the incident was not as deadly as initially thought. The bad news is that the sisters don't have the whole story about how it started.

So many things are excellent about this movie. The animation is, if anything, improved from the original. The scenery is as beautiful as ever, but what really struck me this time around was the facial movements of the characters. There must have been some new form of motion capture going on, because Anna doesn't just have Kristen Bell's voice, she's Kristen Bell. I don't know if the same thing goes for the other characters because I don't watch those actors from week to week like I do with Bell and "The Good Place," but Anna's body language matches her mannerisms exactly. And the movie gives us not one, but two Idina Menzel spotlight songs that I'd say have a good chance of competing against each other at the Oscars. Disney is pushing the first, called "Into the Unknown," but I preferred the second, "Show Yourself." Whichever one "wins," the real winners are Menzel and her fans.

To be sure, there are just as many things that don't work about "Frozen II." I've already listed a few, but there's also Olaf taking on a new philosophy that doesn't quite fit his character, new human characters not being particularly interesting, and a third-act heart-wrencher that comes off as manipulative and unearned. A love ballad that heavily involves Sven I'll call a draw. The point is that even though I couldn't ignore those issues, my gut tells me that all I'll remember six years from now is that this is the movie that gave us "Show Yourself" and Elsa testing her powers against the mighty sea. Oh, and the Rock Trolls are barely in this one.

"Frozen II" is rated PG for action/peril and some thematic elements. Its running time is 103 minutes.