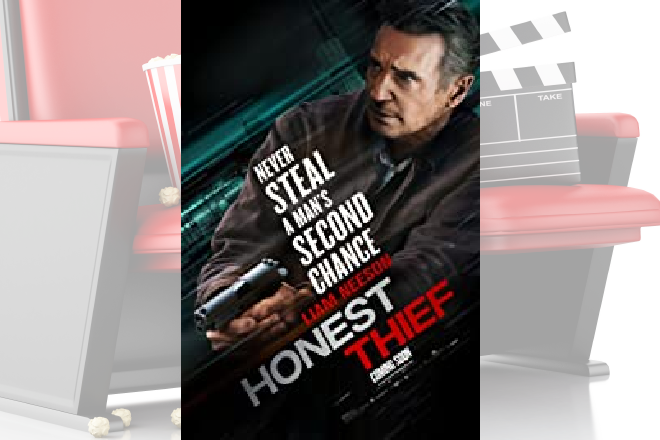 "Honest Thief" is a perfectly middle-of-the-road Liam Neeson action vehicle. Not as bad as "Unknown," not as good as "Cold Pursuit." It would get stomped by any real competition at the box office, but of course this is the Era of No Competition. Actually, it's the Era of No Movies At All in certain parts of the country - including New York City, where I live - so I'm grateful to be able to visit my family in Pennsylvania and see anything in a theater, even something as disposable as this.

Neeson stars as Tom Dolan, a career bank robber who's getting bored with his once-exciting line of work. While renting a storage locker for an ill-gotten $9 million, he meets aspiring psychologist Annie (Kate Walsh), and the two fall in love. A year later, Tom wants Annie to move in with him. There's just one problem - she doesn't know that he used to rob banks. Tom wants to put that chapter of his life behind him so badly that he calls the FBI to turn himself in. He figures that if he returns all the money (apparently the robberies were all for sport and he never spent any of the money, which raises unanswered questions about how exactly he supports himself), he'll get a reduced sentence and can get out in a few years with a clear conscience and a girlfriend waiting for him.

The FBI suits set promptly to mucking the whole thing up. First they don't believe Tom when he tells them he's the notorious In-N-Out Bandit (he hates the nickname because it makes him sound unprofessional, I'd hate it because it makes people think of fast food). High-ranking agent Baker (Robert Patrick, cast in a small role just to get his name on the poster) doesn't take Tom's claim seriously and sends underlings Nivens (Jai Courtney) and Hall (Anthony Ramos) to investigate. Tom is annoyed by the runaround, but cooperates with Nivens and Hall in a rush to get the unpleasant business over with. The agents need evidence to verify Tom's claim, so he tells them where they can find some of the money. Except that they don't keep the money as evidence, they keep it for themselves. They've just made millions of dollars in an easier way than robbing a bank, except of course, for the loose end in Tom. They try to silence him, but this is a Liam Neeson action movie character, so you know he's got a Very Particular Set of Skills.

The rest of the movie is Tom playing cat-and-mouse with Nivens and Hall. Better make it dog-cat-mouse since the good FBI, led by Agent Myers (Jeffrey Donovan) is also involved. Myers' defining character trait is that he has a dog that he got in a divorce, and I can just picture the writers trying to work a dog into the script because they've seen "John Wick" too many times. People get crossed (Tom sells out one character rather unnecessarily), murders take place, and Annie gets pulled into danger, but she's the kind of character that if she doesn't get killed in Act 1, she'll probably be okay for the rest of the film.

The story, motives, and even action are secondary in "Honest Thief." The whole project is merely an excuse for Liam Neeson to do his Liam Neeson thing. Like his gravelly voice? You'll be satisfied. Like to see him making threats over the phone? This movie has you covered. Like to see him interacting with a romantic interest? He and Walsh have good chemistry and they take the material more seriously than it deserves. But this is a bland movie content to play to movie-starved viewers that are willing to settle for bland.

Albertsons merger with Kroger could impact...