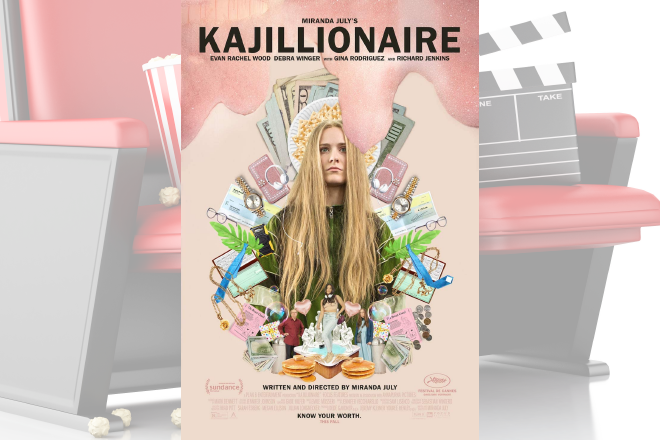 The characters at the heart of writer/director Miranda July's "Kajillionaire" are not as interesting as Miranda July thinks they are, but they do raise an interesting question: how have these people managed to survive for so long when they are complete idiots? There are parallels between the downtrodden "Kajillionaire" family and the one from Bong Joon-ho's Best Picture Oscar-winning "Parasite," but those were smart, resourceful people who were going to capitalize on an opportunity eventually, it was just a matter of when and how. With "Kajillionaire," it's hard to believe that a lifetime of proudly doing the bare minimum in life is just now catching up to these characters.

Old Dolio Dyne (Evan Rachel Wood) is a petty scam artist, along with her parents Robert (Richard Jenkins) and Theresa (Debra Winger). They do things like steal uneaten food and get refunds on improperly-obtained store merchandise. They're three months behind on rent for their home, an office space attached to a leaky soap factory. The trio operate more as a partnership than a family, and lately the older members are feeling like the awkward Old Dolio (July is in love with that name, allegedly based on a lottery-winning hobo) isn't pulling her weight. Really none of them are pulling their weight, but that's just the power the parents wield. Old Dolio needs to come up with the ultimate con job, one that will net them an unprecedented $1,500. That's a rather low bar to clear, but these people aren't aspiring to be kajillionaires or anything.

The plan involves the three of them flying to New York from Los Angles and back again. Upon returning, the parents will walk off with Old Dolio's checked luggage, netting her $1,575 from travel insurance. On the return flight, the parents meet the talkative Melanie (Gina Rodriguez) and take an instant liking to her. She agrees to get in on the scam, as she loves the "Ocean's Eleven" movies. There's a hold-up on the check, and the parents scold Old Dolio for her lousy planning, but there's new hope in Melanie, whom the parents seem to prefer to Old Dolio. She's an optician's assistant who makes house calls, so they can pose as her family and steal from her elderly clients. One affords them the opportunity to pose as rich people, in a scene where comparisons to "Parasite" are unavoidable. But then the airline check does come through, made out to Old Dolio, and she's in a rare position of power over her parents. This comes at the same time as the parents alienate Melanie, who is willing to side with Old Dolio, leading to a series of head games between the old folks and the young women.

The best thing I can say about "Kajillionaire" is that the actors are trying. I have no problem believing that these characters have behaved like this for decades, only that society has allowed them to get away with it. Everybody is committed to delivering the most fleshed-out versions of these characters that they can, whether it's Jenkins freaking out over earthquakes and airplane turbulence, Winger sharing with her daughter seemingly the only piece of relationship advice she knows, Rodriguez oversharing details about her family, or Wood turning her effortless camera-aversion techniques into her first-ever attempt at dancing.

But I'm sorry, I just can't get excited over a movie where the stakes are so low, and that prides itself on those low stakes. Worst case scenario: these people who should have been thrown out on the street years ago get thrown out on the street. Actually, the worst-case scenario is that Old Dolio gets rejected by her parents, but being separated from these losers is probably in her best interest. At a time when two movies about con-artist families are available On Demand, "Kajillionaire" is the inferior choice.

NOTE: Surprisingly, my computer's spell-check has no problem with the word "Kajillionaire." It sounds made-up, butparently, it's recognized.

"Kajillionaire" is available On Demand through online streaming services and likely through your local cable provider. The film is rated R for some sexual references/language. Its running time is 104 minutes.