The new big-screen version of the Louisa May Alcott literary classic "Little Women" pulled off something of an upset at the Christmas box office. No, it couldn't overcome the juggernaut that is "Star Wars: The Rise of Skywalker" in its second week or agreeable franchise piece "Jumanji: The Next Level" in its third. But it did manage to be the strongest new release of the weekend over the animated adventure "Spies in Disguise." I'm glad it won, because I was not looking forward to stretching "the main character has to learn teamwork - how original" out to 600 words. 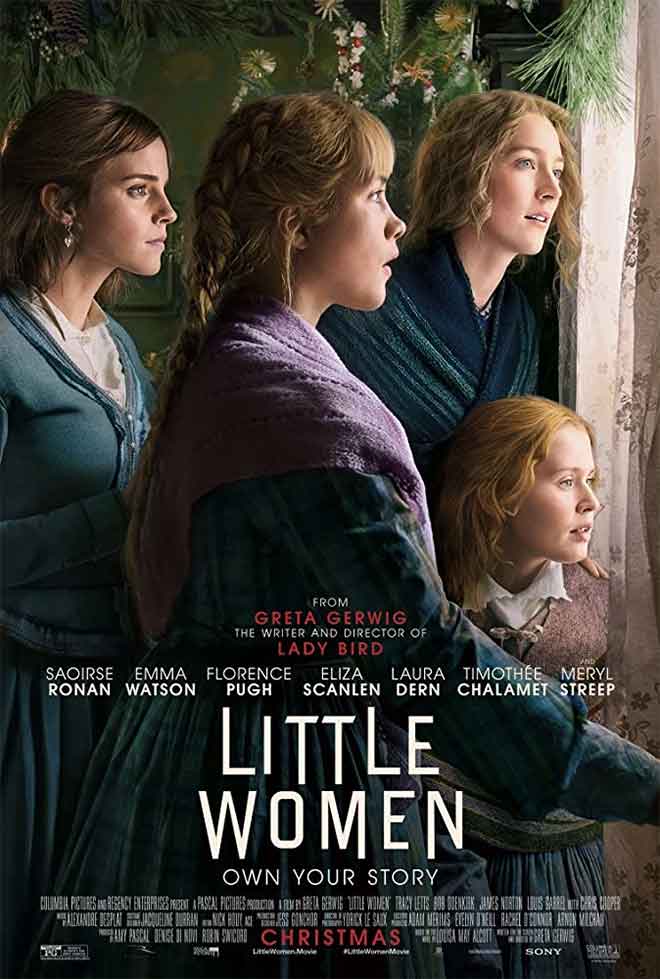 The film is a quadruple coming-of-age story set in the late 1860's focusing on the artistically-inclined March sisters: actress Meg (Emma Watson), writer Jo (Saoirse Ronan), musician Beth (Eliza Scanlen), and painter Amy (Florence Pugh). The sisters go through episodes of love, loss, career aspirations and compromises, all with the loving support of their mother (Laura Dern) and the typically-disapproving gaze of their aunt (Meryl Streep). The family goes through some money troubles due to the absence of its patriarch (a casting choice that took me off guard) because of the war effort, but some help is offered in the form of wealthy neighbor Mr. Laurence (Chris Cooper, in a role yours truly played in a high school production). Laurence's grandson Theodore (Timothee Chalamet), nicknamed "Laurie," takes to spending time with the March family, especially Jo.

The outspoken Jo is probably the most famous character of the story. She wants to go to New York and focus on her writing career and sees no value in the institution of marriage, driving away a love-stricken Laurie. Meg agrees rather quickly to marry Laurie's tutor John (James Norton), but will choosing the poor-but-happy lifestyle ultimately make her unhappy? Amy goes to Europe, where she meets up with a self-pitying Laurie, who tries to pursue a relationship with her, but she suspects that he's only doing so because he still pines for Jo. Beth contracts an illness that forces Jo to come home from New York, which is just as well since her writing career is floundering. She's barely scraping by writing pieces that aren't conducive to her voice, which draws criticism from her scholar housemate Friedrich (Louis Garrel). Spending time with Beth helps Jo rediscover her love of writing, to the point where she plans to show her chauvinistic publisher (Tracy Letts) a certain autobiographical work.

New to this version of the story is that certain scenes are flat-out imagined while others are excerpts from Jo's book. It's a unique approach, through it does make continuity difficult to follow, a problem not helped by the fact that it's told out of order. At one point toward the end, the publisher asks, "Wait, so who does [the Jo character in the book] marry?" I could ask the same of the Jo character in the movie. Unlike the publisher, I have no problem if it's nobody, I just want a clear picture.

Director Greta Gerwig fills her version of "Little Women" with her own creative voice, a risky move when adapting such a well-known property, but it pays off with a series of all-new empowering moments and messages. I wish the "own voice coming through" element also applied to the performances, with the actresses clearly struggling to make the century-and-a-half dialogue sound natural. They try to mask it with a talking-on-top-of-each-other style that would make Robert Altman proud, but they don't quite pull it off. Still, this new take on a classic is a nice change of pace from the hoard of effects-driven blockbusters that otherwise dominate the big holiday weekends.

"Little Women" is rated PG for thematic elements and brief smoking. Its running time is 135 minutes.

Atmos Energy - Notice of Change in...