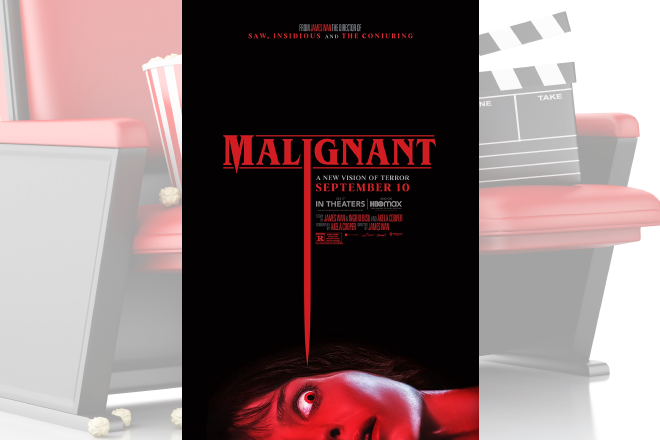 This was not a good weekend for new releases. Studios weren't eager to release many movies in the shadow of "Shang-Chi and the Legend of the Ten Rings." And considering that movie's $35 million second-weekend haul, I can't say I blame them. The best-performing new release didn't even come in second to "Shang-Chi," it came in third behind the fifth weekend of "Free Guy." I saw the horror movie "Malignant" on Friday night, a prime moviegoing time, and there couldn't have been more than ten people in the theater. But I guarantee that every one of those less-than-ten voices was screaming and laughing and screaming with laughter at the last act of this movie.

Madison (Annabelle Wallis) is pregnant for the fourth time in two years, having suffered three miscarriages. Her husband (Jake Abel) gets mad at her during an argument and smashes her head against the wall. He then goes downstairs where doors open, things go bump, and he's... eliminated from the movie. Madison's sister Sydney (Maddie Hasson) later comments that "nobody deserves to die like that," but yeah, he did. Unless maybe you count getting off too easy as being undeserving.

Madison is also attacked by the mysterious entity, resulting in miscarriage number four, and even worse, the police (George Young and Michole Briana White) suspect her of the crime. She returns home only to be terrorized by visions of other murders. The victims were all doctors at a hospital where she stayed as a child. She gets a mysterious phone call from Gabriel, a sort of invisible friend from her childhood. He's somehow behind the murders, and he clearly has plans for her, but who or what is he exactly?

So far we have a horror movie like a million horror movies before it: cheap jump scares, a big house with lots of rooms and hiding spaces, childhood trauma (complete with an invisible friend), and a protagonist with a story that no one will believe. There's even a killer named Gabriel, a name bad movies love to use for villains because they think they're being clever ironically naming an evil force after a famous angel. There's so little originality here that it's actually a blessing when some of the actors give terrible line readings because at least those scenes stand out, if only for the wrong reasons. But then we learn the truth about Gabriel, which rips off not one, but two episodes of "South Park."

Suddenly this is the most bonkers movie to come down the pike in years. We get a pair of action sequences - one in a jail cell and the other in a police station - that take us back to the early 2000's with "Matrix"-ripoff action and editing. Just like characters in that movie famously bent backwards, so does at least one character here face in an odd direction. Mind you, none of this action is particularly "good," it's just memorable because of the brutality and the nature of one of the participants.

A movie as absurd as "Malignant" deserves an absurd letter grade. I'm giving it a B-minus-minus. The first 80% of this movie is bland and terrible, the last 20% is over the top and terrible. Director James Wan is at his haunted-house-obsessed worst here, and I could tell Wallis and Hasson were being coached by the same person who directed Elisabeth Moss in "The Invisible Man" because there's so much overlap in the acting styles (but here the originality is gone). This movie is not worth a recommendation in any sort of traditional sense, yet I feel compelled to give it my highest recommendation. My screening ended after midnight and I was seriously tempted to immediately call up family members and tell them about the weirdness of this movie. "Malignant" had me laughing harder than any movie in the last two years, though I'm not sure it was always going for laughs.

"Malignant" is playing in theaters and available for streaming on HBO Max. The film is rated R for strong horror violence and gruesome images, and for language. Its running time is 111 minutes.

Voters in North Dakota can vote to legalize...