"Queen & Slim" came in fourth place at the weekend box office. It's not hard to see why the film finished so low; it's playing on fewer than half the screens of higher-ranking holdovers "Frozen II," "Knives Out," and "Ford v Ferrari." But I can also see why it finished so high despite playing on fewer screens than the fifth- through ninth-place finishers. Most of those movies are lousy also-rans that couldn't find an audience over the lucrative Thanksgiving weekend, let alone the non-holiday follow-up. It's just the kind of opening that a small-but-solid performer like this needs to find relative success. Another reason why this film is doing so well: it's actually pretty good. 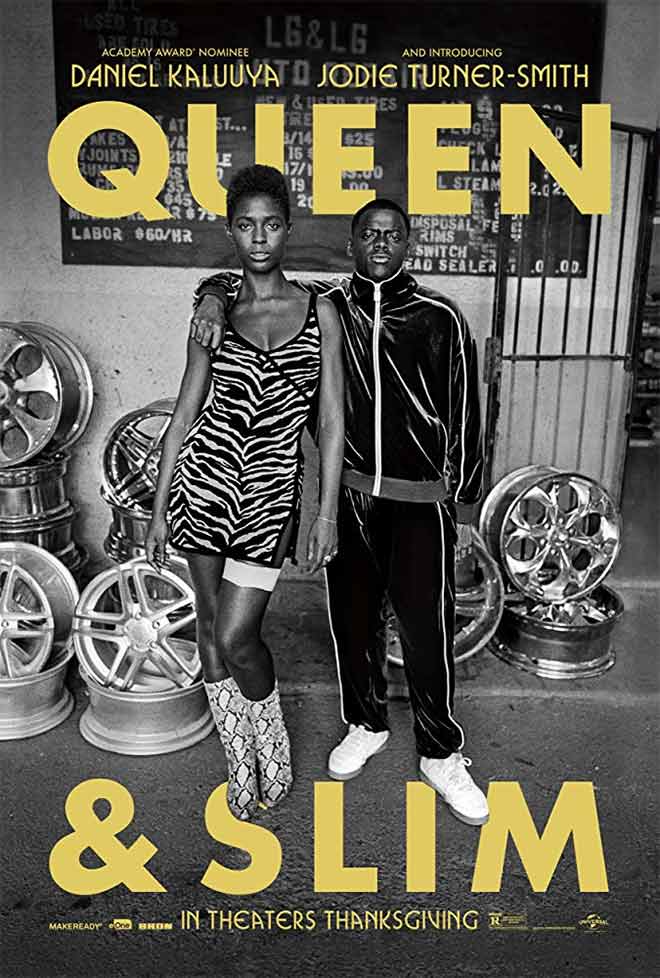 I could swear that the main characters are not assigned the titular nicknames at any point in the movie, but my research tells me I'm wrong. Affluent African-American Queen (Jodie Turner-Smith) and everyman African-American Slim (Daniel Kaluuya) meet up for a date arranged online and discover that they have nothing in common. She eats veggies, he eats diner junk. He believes in God, she doesn't. And don't even get them started in their different tastes in music.

The evening looks to be a bust, and then things go from bad to worse when Slim is driving Queen home and he gets pulled over by a white cop looking for any excuse to arrest them. The confrontation escalates, Queen is shot and wounded, and the cop is shot and killed. Dashcam footage shows the altercation, and lawyer Queen knows that the other cops will see the footage and only look to see who shot their colleague and not the self-defense circumstances surrounding the death. If the cops catch the pair, they'll murder them before they can bring the truth to light. Now is not the time to try and resolve the situation. Now is the time to run.

The duo-but-not-couple flee, traveling from Ohio to Florida in hopes of making it to Cuba. They meet up with colorful characters along the way, like a gas station clerk, who, in the middle of a robbery, asks to hold Slim's gun. Perhaps most memorable is Queen's PTSD-afflicted uncle (Bokeem Woodbine), who owes Queen because she did him an unthinkable favor in the past. Most of the African-Americans they meet are sympathetic to their plight, with many comparing them to a modern-day Bonnie & Clyde. The comparison is both unfair (Bonnie & Clyde knew they were committing crimes, whereas Queen & Slim made a rash decision that some would argue isn't even a crime, at least not initially) and ominous, as Queen & Slim might be heading toward the same fate (death, not messing up at the Oscars). That is, of course, if the squabbling set don't kill each other first, though with a movie like this, it's much more likely that they'll fall in love.

"Queen & Slim" gets the big moments right, like the early confrontation with the cop and the finale. These moments got strong emotional reactions from the audience at my screening, and even I was biting my thumb over some of the injustices (be warned - this movie deals with some very upsetting subject matter). But the movie isn't so great in its smaller moments. Kaluuya and Turner-Smith are excellent actors, but the dialogue is stiff, the characters keep making decisions that I don't believe these characters would make, and the plot is little more than a series of excuses to meet up with mostly-uninteresting supporting characters. Still, this is a good choice of movie to tide you over between Thanksgiving blockbusters and Christmas blockbusters.

"Queen & Slim" is rated R for violence, some strong sexuality, nudity, pervasive language, and brief drug use. Its running time is 132 minutes.