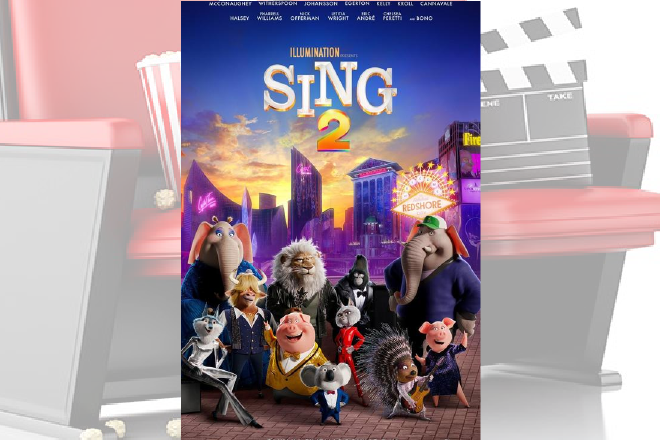 The original "Sing" from 2016 holds an interesting record at the domestic box office. With $270 million, it is the highest-grossing film to never actually be the #1 movie in America. It opened the week after "Rogue One: A Star Wars Story" and could never quite escape that film's shadow. Likewise, "Sing 2" is opening the week after "Spider-Man: No Way Home," a film that has made $180 million more in its first ten days than "Rogue One" did. This movie can't hope to take the top spot, but it can hope to be a success in second place over two holiday weekends like its predecessor. Unfortunately, also like its predecessor, I can't say I think much of it.

Much of the cast of the first movie is back: Matthew McConaughey as aspiring producer/koala Buster Moon, Reese Witherspoon as overworked housewife/pig Rosita, Scarlett Johansson and punk-rock porcupine Ash, Taron Egerton as surprisingly sensitive gorilla Johnny, Tori Kelly as shy elephant Meena, Nick Kroll as enthusiastic pig Gunter, director Garth Jennings as glass-eyed iguana Miss Crawly, and Jennifer Saunders as wealthy backer/sheep Nana Noodleman. Saunders has arguably the most heartfelt scene in the movie when she tells Buster to not go to pieces over a bad review of his stage show.

Buster and his small-town crew go to the big city to try to land a residency at a casino owned by wolf Jimmy Crystal (Bobby Cannivale, as a Steve Wynn approximation, though there seems to be some Donald Trump thrown in for good measure). Ever one to over-promise, Buster says he can not only put together a full-blown space musical in three weeks, but land reclusive rock star lion Clay Calloway (Bono) to make nightly appearances.

To the surprise of no one, things go awry. Gunter keeps making changes to the script, Rosita is afraid of stunt that involves a high jump, Meena doesn't want to kiss her scene partner/yak Darius (Eric Andre), Jimmy can't dance and is terrified by choreographer monkey Klaus (Adam Buxton), Jimmy's dimwitted daughter Porsha (Halsey) wants to be the lead in the show and Buster can't tell her no, and Calloway is so opposed to performing that he shoots at Miss Crawley when she politely calls on him. He only shoots her with paintballs, but the poor woman is traumatized by the experience.

Lessons are learned, fears are overcome. It's worth mentioning that the solution for Johnny's dilemma involves tutoring from lynx street dancer Nooshy (Letitia Wright) and Meena's involves ice cream-peddling elephant Alfonso (Pharrell Williams). Much suspense is built around whether or not Calloway will perform "I Still Haven't Found What I'm Looking For." The trailers for the film gave away that he does, and I should be mad at them for playing spoiler, but the movie did get Bono for the role, so... pretty safe bet.

Speaking of "safe," that's exactly what "Sing 2" is. Colorful, cute, predictable, and safe. My only major gripe is with the writing of the villain (why is Jimmy turning away an experienced theater troupe and auditioning one-note players with no chance other than to give us a montage, not to mention taking unproven stranger Buster at his word?). I can't pretend some of the songs and dancing weren't catchy, but I can't say I found them particularly memorable. I only laughed at maybe one out of five jokes, but there weren't too many groaners. I probably would have disliked this movie more if I hadn't spent the previous two nights letting "The Matrix Resurrections" and "The King's Man" eat up most of my disdain. This is a movie for families with kids too young to see "Spider-Man: No Way Home" and that have already seen "Encanto." At least, you better have already seen "Encanto" if you're taking your family to this. You know what? See "Encanto" again anyway. Only see "Sing 2" if you've seen "Encanto" at least twice.

"Sing 2" is rated PG for some rude material and mild peril/violence. Its running time is 110 minutes.