So, this is it, everybody. This is how "Star Wars" ends. At least, this is how "Star Wars" was supposed to end at one time. George Lucas conceived of the space saga as a nine-part series, with the "original" trilogy (Episodes IV-VI) coming out in the 70's and 80's, the prequel trilogy (Episodes I-III) coming out in the 90's and 2000's, and the final trilogy (Episodes VII-IX) coming out in the 2010's. Since then, of course, the "Star Wars" world has expanded beyond the films, with books, TV shows, toys, theme park attractions, and... other films. With the universe growing at every opportunity, it's hard to see "The Rise of Skywalker" as the culmination of a 40+ year journey that it's supposed to be. Which is just fine, because if this really is the end of "Star Wars," then the franchise is ending on a disappointing note. 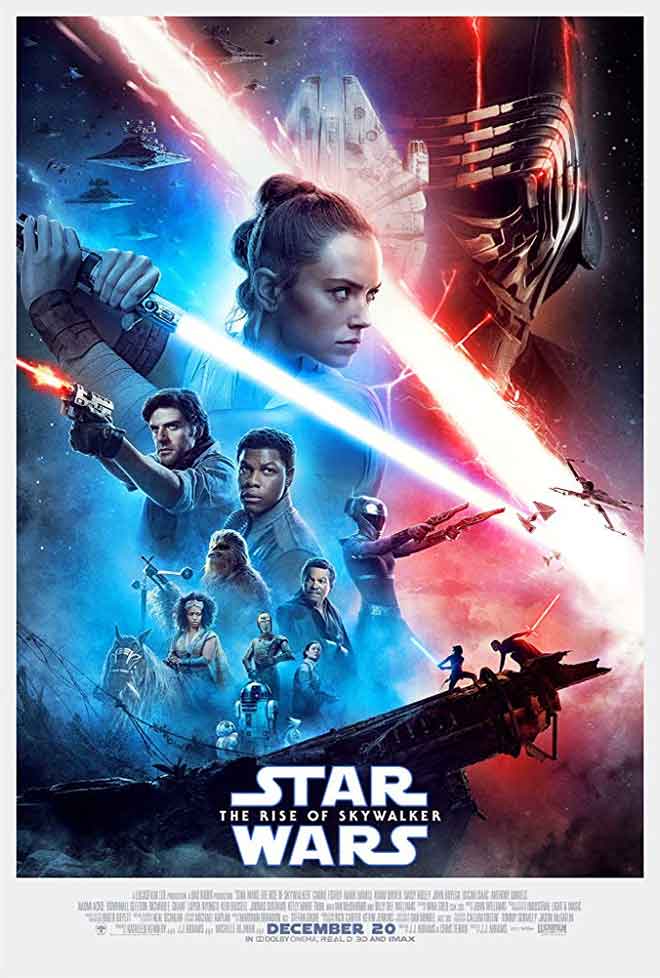 At the beginning of "The Rise of Skywalker," the evil First Order is in shambles after the death of unpopular villain Supreme Leader Snoke in Episode VIII. New Supreme Leader Kylo Ren (Adam Driver) tracks down a surprise returning villain, who agrees to help the First Order conquer the galaxy if Kylo can kill Jedi-in-training Rey (Daisy Ridley). Rey, a member of a Resistance group led by General Leia (the late Carrie Fisher), sets out to find and destroy the First Order's new backer, aided by friends Finn (John Boyega), Poe (Oscar Isaac), Chewbacca (Joonas Suotamo), and C-3PO (Anthony Daniels, the only actor to "appear" in all nine "Star Wars" Episodes). The group is pursued from one planet to another by Kylo, who has a connection to Rey through the ever-mysterious Force and wants her to rule the galaxy by his side, though that's going to be tricky with the whole "she's not evil" thing.

This movie was never able to inspire any really consistent feelings in me, just lots of little ones. Rey is still a likeable protagonist, though she's so far along in her Jedi training that her near-perfection makes her nearly unrelatable. Kylo is so determined to bite every hand that feeds him that I simply could not see a future for him beyond this movie. Initially-interesting characters like Finn and Poe are barely developed, they just exist to be behind the controls of spaceships during chase scenes and battles. The Leia character is finally given satisfying closure (after Episode VIII blew its chance), I was surprised that such a full performance from Carrie Fisher was in reserve. The idiot villain spells out his evil plan, so Rey knows exactly which pitfalls to avoid. Cameos and returns from the dead were once exciting in this series, now I just wearily tick them off as they come and go. This movie wants to remind viewers of "Harry Potter" with the relationship between Rey and the new/old villain, but it really wants to remind viewers of "Avengers: Endgame" with its climactic space battle and a certain exchange of dialogue.

It all adds up to a bland, forgettable movie. I still remember C-3PO's reintroduction in Episode VII as one of the funniest scenes of 2015. I still remember cheering loudly for the Luke Skywalker/Kylo Ren showdown in Episode VIII back in 2017. It's been only two days since I saw Episode IX and I'm struggling to remember anything about the movie, including how I felt about it. This is "Star Wars," so it's going to make a lot of money through the end of 2019, but I'd expect its business to fall off soon after that because of its utter lack of remarkability. If George Lucas wants the series that is his legacy to end on a high note, he's going to have to make another movie and round things out with an even Episode X.

"Star Wars: Episode IX - The Rise of Skywalker" is rated PG-13 for sci-fi violence and action. Its running time is 141 minutes.