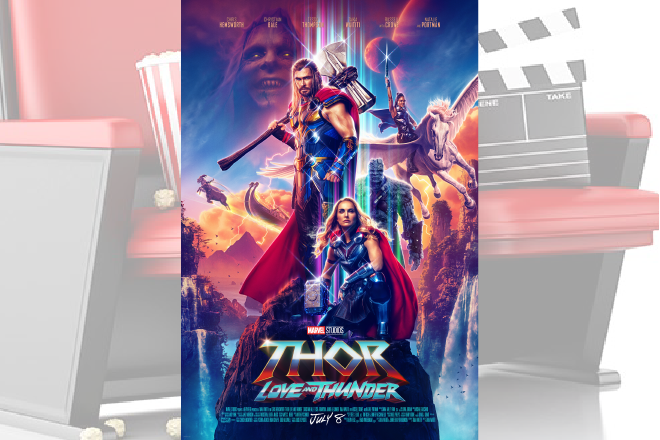 Thor (Chris Hemsworth) hasn't been seen in the Marvel Cinematic Universe since 2019's "Avengers: Endgame," where he decapitated Thanos, got really fat, and ultimately left to go have space adventures with the Guardians of the Galaxy. I remembered the first two parts just fine, but I had to be reminded of the third prior to "Thor: Love and Thunder." It seems like the movie had to be reminded of that as well, like it only remembered at the last minute that it needed to include the Guardians. Chris Pratt and company pop up early in this movie, but they and Thor soon part ways. If you saw this movie's advertising and thought you were in for a 50/50 Thor/Guardians split, you are in for a letdown.

Fortunately, the old-hat Guardians are replaced with something arguably even better: the return to the MCU of Jane Foster (Natalie Portman), Thor's former lover from the Asgardian god's first two standalone films in 2011 and 2013. Jane's mind is as sharp as ever, but her body is failing her. She travels to the city of New Asgard, now a tourist trap run by a bored Valkyrie (Tessa Thompson), to see if she can be magically treated by the remnants of Thor's hammer Mjolnir, which was destroyed in "Thor: Ragnarok" back in 2017. Due to a protection spell put on the hammer by Thor while he and Jane were dating, the hammer repairs itself with Jane as its new wielder.

Jane teams up with Thor, Valkyrie, and Korg (Taika Waititi, also the film's director) to battle villain du jour Gorr (Christian Bale), a heartbroken former worshipper with a god-killing Necrosword and a grudge against all gods following the death of his daughter. Our heroes travel to Omnipotence City to ask Zeus (Russell Crowe, doing a Borat voice for some reason) for an army to battle the God Killer, but are met with mockery and refusal. It turns out Gorr has a point about gods caring more about indulging in hedonism than doing anything god-like. But he's kidnapped a pack of New Asgardian children to use as Thor-bait, so he needs to be stopped.

The writing of Gorr is probably the worst thing about the movie. Bale is acting his heart out, and the character is truly sympathetic at times, but he's just such an afterthought for all but about three scenes. And in between those scenes he's a sarcastic jerk, which isn't consistent with his overall tone or motivations. The movie really dropped the ball with this character.

But then there's the best thing about the film, which is Hemsworth's effortless chemistry with everybody, especially Portman. The ups and downs of their relationship are much more exciting than any action sequence, which are pretty much what's to be expected from the MCU at this point. It's thanks to them that life and death seem consequential in the MCU again, which is refreshing after a few movies where I've become convinced that characters can always be brought back via Infinity Stones or Multiverse shenanigans. Second to Portman is Hemsworth's chemistry with new weapon Stormbreaker. Not since Joan Rivers has an old battle axe had this much personality.

I'll give "Thor: Love and Thunder" a mild recommendation, thanks mostly to the efforts of Hemsworth and Portman, and Bale in the few scenes where his character's pathos really comes through. The humor can be hit-or-miss (this movie thinks there is nothing funnier than screaming goats) and the action is memorable only for being set to the music of Guns N' Roses. This movie isn't essential MCU viewing, but it's okay for something on the second or third tier.

"Thor: Love and Thunder" is rated PG-13 for intense sequences of sci-fi violence and action, language, some suggestive material, and partial nudity. Its running time is 118 minutes.