When we last saw curmudgeonly crime against cinema Mabel "Madea" Simmons (creator/writer/director/star Tyler Perry), "she" was starring in "Boo! 2: A Madea Halloween," a film so bad I doled out my first D- grade in nearly five years. Now she's back with "A Madea Family Funeral," and I'm sorry to say that the funeral isn't for Madea. In fact, not only does death not make for less Perry obnoxiousness, it makes for more. Perry has inexplicably chosen this occasion to debut yet another character, a legless throat-talker named Heathrow who serves no purpose to the story, but does drag out the film's run time with unfunny antics. 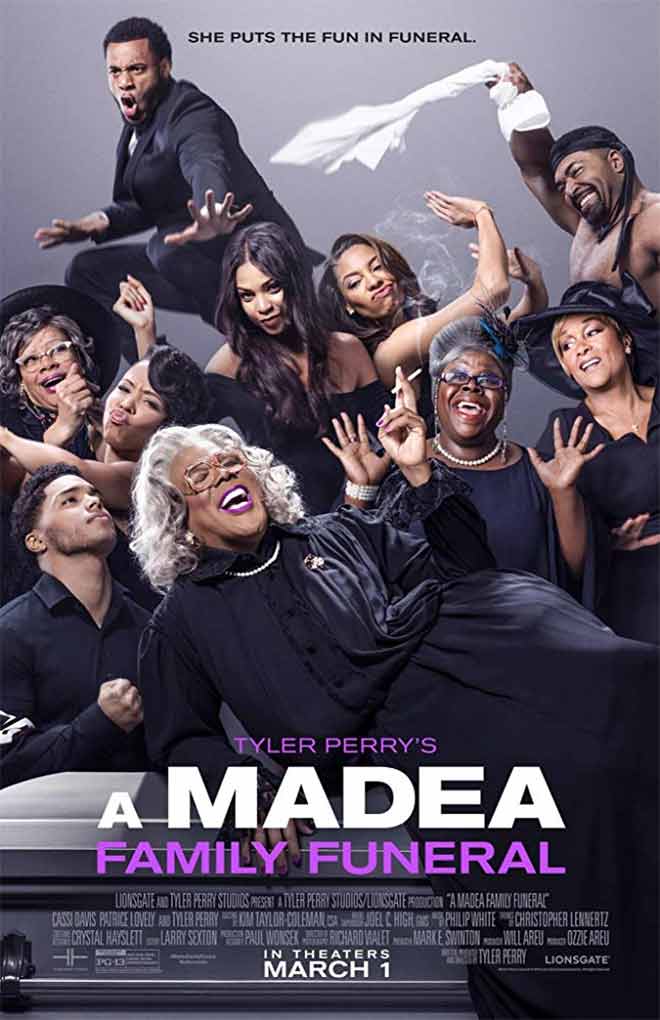 The story sees Madea and her crew travel to an anniversary party for a heretofore unmentioned relation, a brother named Anthony (Derek Morgan) and his wife Vianne (Jen Harper). Madea's entourage consists of her brother Joe (also Perry), nephew Brian (Perry again), and friends Bam (Cassi Davis) and Hattie (Patrice Lovely). The group checks into a hotel and hear a commotion in a nearby room. It's Anthony, dying of a heart attack. And why was Anthony at the hotel? To have an afternoon fling a with a woman who is not his wife. To make things even more complicated, Anthony's son A.J. (Courtney Burrell) was also in a nearby room, cheating on his wife Carol (K.J. Smith) with Gia (Aeriel Miranda), the fiance of his brother Jesse (Rome Flynn). The anniversary celebration turns to funeral planning for Anthony's family, and Madea and company have to keep the various secrets from coming out, though to be honest they aren't very well hidden in the first place.

The problem with this movie, as it is with all Tyler Perry movies, is that Madea and her crew (minus straight-man Brian but plus Heathrow) are completely insufferable. They're ugly to look at (that's not me being shallow, they're wearing garish makeup for comedic effect) and unpleasant to listen to, both in terms of their grating, incomprehensible-at-times voices and the vile content of what they have to say. There isn't an occasion too reverent for these characters to bring up sex references, bathroom references, drug references, racial references, and in this case, inappropriate death talk. And it's all done without any sense of comedic timing, the characters just ramble on until Brian says "okay guys we've got to go." Actually, sometimes it's Madea who has to reign in the others. These other characters have gotten away from Perry so much that his screaming drag character has to be the voice of reason.

It's actually relieving when the movie takes a break from Madea to focus on the drama with Anthony's family, where the characters are only deplorable for their lying and cheating instead of everything else about them. Though I don't want to downplay my belief that several of these characters are reprehensible and deserve worse than their partners simply leaving them. There are some passionate words toward the end of the movie about strength and sacrifice, but it's too little too late in a movie that doesn't deserve them.

At least "A Madea Family Funeral" makes an attempt at profound seriousness, as opposed to "Boo! 2," which unwaveringly went for Perry's unpalatable brand of silliness. Perry has said that this will be the last Madea movie, which I highly doubt because this film contains no closure for the character and made $27 million in its opening weekend. And make no mistake, Madea has legions of fans. The crowd at my screening roared with laughter while I was burying my face in my hands (as if that would stop the mortifying dialogue). I am dumfounded by Madea's popularity, but I'll be even more dumbfounded if Perry actually chooses to retire her while she can still make her creator millions of dollars in a movie this bad.

"Tyler Perry's A Madea Family Funeral" is rated PG-13 for crude sexual content, language, and drug references throughout. Its running time is 102 minutes.