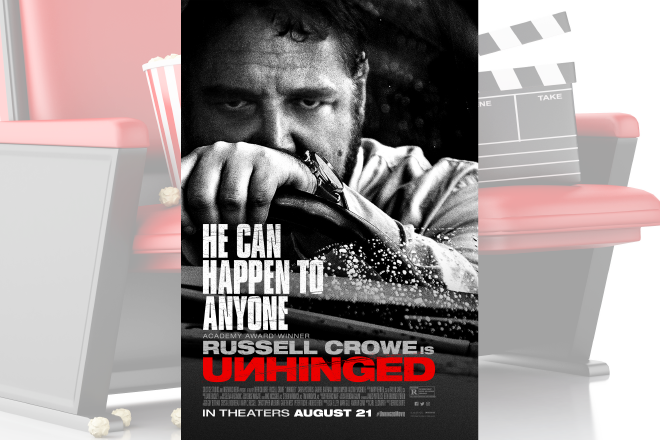 It seems almost quaint to review this movie now. Three weeks ago, "Unhinged" opened as the first big post-pandemic theatrical release. The problem was that the theater closest to my parents' house didn't reopen until a week later. I saw "Unhinged" at the first opportunity, but I also saw (and reviewed) "The New Mutants," which was the bigger movie that weekend. Last weekend saw the release of "Tenet," which also warranted an immediate review, and in fact still sits atop the box office. This means that the time has come to double back and review "Unhinged," though its appeal as the First Movie Back has since worn off.

"Unhinged" stars Caren Pistorius and Russell Crowe (don't let the advertising trick you into thinking Crowe is the lead) as two people locked in a deadly game of cat-and-mouse on the battleground of our volatile nation's overcrowded roads. Like many people, Rachel (Pistorius) leads a stressed-out life. She's going through a divorce from her uncooperative ex, her hairdressing business is hanging by a thread, her brother (Austin P. McKenzie) and his girlfriend are living with her but not contributing to the household, and traffic on the way to drop her son (Gabriel Bateman) off at school is a nightmare. The last thing she needs is a zoned-out driver dilly-dallying at a green light. But that's exactly what she gets, and she honks angrily at him.

That driver is Tom Cooper (Crowe), fresh off killing his ex-wife and her new lover. He's none too happy about the honk, feeling that Rachel breached roadway etiquette by jumping straight to a big honk instead of starting off with a "courtesy tap" (little honk). He goes so far as to apologize for his role in the incident, but he expects Rachel to do the same. She refuses, and Tom figures that since he'll probably get caught soon for the murders, and he doesn't plan to be taken alive, he might as well spend his last day on Earth ruining the life of this woman who wronged him, however briefly.

Tom follows Rachel around, intimidating her. She's forced to drive evasively, making several dangerous maneuvers in the process. She stops at a gas station and convinces a stranger to walk her to her car and intimidate Tom back, but Tom proves a point by neutralizing him. Tom also steals Rachel's phone, which opens up a world of opportunities for him. He finds out about a lunch date with her divorce lawyer, her bank account information, and the addresses of all her family and friends. Tom proceeds to go on a bloody path of revenge that only he considers "revenge," the rest of us would just call it petty, petty murdering.

Crowe as Tom is a crazy, intimidating presence, and the movie finds some creative ways for him to mess with Rachel, but the non-Crowe dialogue is uninvolving, the characters bounce between smart and stupid depending on what they need to be for the story to continue, and I think it was a mistake to have Tom be a psychotic murderer from minute one. I think he would have been a much more interesting character if he had just been a regular guy who snaps and carries out a "death is too good for you" revenge fantasy.

Aside from the Crowe performance, "Unhinged" is a direct-to-On-Demand-quality movie. Except it went to the big screen, where the nerve-racking plot and sensory overload of horns and skids and crashes (compounded by five months of my senses being deprived of big screens and theater-sized sound systems) triggered my chronic anxiety. Don't get me wrong, I can respect a movie that successfully pushes my buttons, but my immediate reaction was to flop around in my seat and loudly shudder every few minutes. Fortunately, there were only two other people in the theater and they didn't seem bothered by my admittedly-distracting behavior. If the wrong person had been in that theater, they might have demanded an apology...

"Unhinged" is rated R for strong violent content, and language throughout. Its running time is 90 minutes.