Emma passed peacefully from this life into a better one December 9, 2018, in Eads, Colorado with her daughter by her side.  She was 90 years old.

The oldest of three children, Emma was born June 3, 1928, on a farm near Lamar, Colorado to Adam and Mary May.

She attended grade school in the May Valley area with many German friends and family members.  After graduating from Lamar Union High School in 1946, Emma moved into town, living in a boarding house with her friends.  She worked as a telephone operator, forming lifelong friendships with her co-workers.  During that time, she was crowned Miss Lamar, competing later in the Miss Colorado pageant.  She won but declined the title when they wanted her to stay in Denver for a few weeks of dance lessons.  She'd realized competing further for a college scholarship was not her life's dream at that time - she wanted to get married and have children! 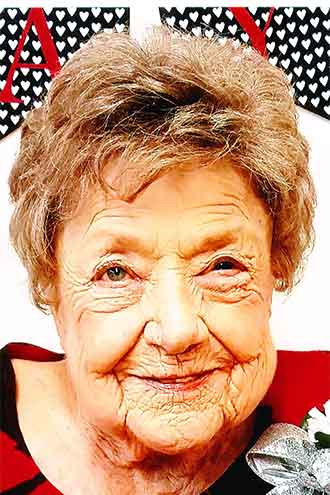 Emma married her high school sweetheart, Don Briggs, September 5, 1948 shortly after he graduated from Junior College.  Don was employed by Des Marteau Commission Co. in Lamar and was offered the job as manager of the newly built Haswell grain elevator.

In June 1953, they packed up the pink Nash Rambler and moved with their toddler son, Scotty, to Haswell where they lived until an eye disease necessitated a move closer to a hospital and other amenities.  In 1994, they cleared a couple of acres and built a home surrounded by pine trees near the Eads golf course.

During those Haswell years, Emma made new friends quickly and became involved in many community events.  She helped in the local church and with a myriad of school events, sang in the Sweet Adeline group, bowled on various women's teams, was Den Mother for the Cub Scouts, and even coached Little League Baseball with her close friend, Rita Cloyd.  There were many Haswell community dances and sing-a-longs on weekends for entertainment.  Emma loved to dance and was recognized as one of the best.  She had a talent for hair styling and fixed the hair of many ladies in town on a weekly basis.  Emma served as "chauffeur," constantly hauling kids to swimming lessons, sporting events, roller skating parties and movies - the latter requiring her to wait patiently at local cafes until time to drive back to Haswell.

Emma was well known for her culinary skills.  She prepared many wonderful meals for her family and anyone who just showed up for dinner or supper, including travelers stranded on the nearby highway during snow and dirt storms.  Always having a freezer full of goodies, she was even known to feed the "true" hobos riding the rails when the train stopped near the elevator.  Emma enjoyed preparing special dishes for potlucks and entertaining family and friends for the holidays, football parties, card parties, marble games, gourmet dinners and women's luncheons.  She also enjoyed "hostessing" events for her children, preparing a beautifully decorated, scrumptious senior prom dinner for her son, Scott, and friends; a fun surprise come-as-you-are 16th birthday breakfast for her daughter, Valorie; breakfast entrees ready for the teenagers to cook after proms and many other events too numerous to mention.

Emma loved her God, her family, her friends and the communities she lived in.  She was preceded in death by her husband Don, her parents, and brother and sister-in-law William (Bill) and Marilyn May.