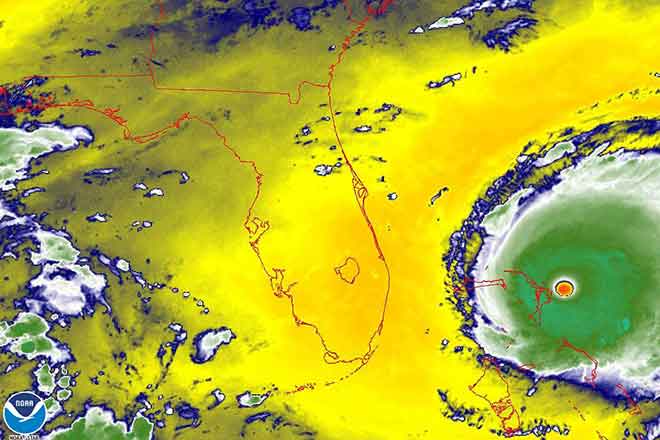 Calling Hurricane Dorian "a life-threatening situation," the National Hurricane Center warned residents of the Abacos Island to stay in their shelters as the Category 5 storm pummeled the Bahamas Sunday afternoon.

"Do not venture out into the eye if it passes over your location," the hurricane center said in a 4 p.m. advisory.

Wind gusts exceeded 220 mph and "a storm surge 18 to 23 feet above normal tide levels with higher destructive waves" were battering the island, the center said. "These hazards will cause extreme destruction in the affected areas and will continue for several hours."

A few hours earlier Sunday, the hurricane henter said that Dorian is "the strongest hurricane in modern records for the Northwestern Bahamas" and that "catastrophic conditions [are] occurring in the Abacos Islands." 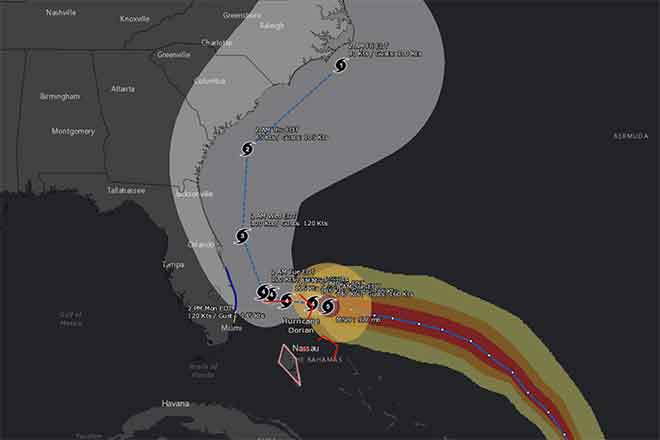 Category 5 storms are the most powerful on the Saffir-Simpson Hurricane Wind Scale.

As residents of the Caribbean islands did their best to cope with the life-threatening story, the southeast coast of the U.S. prepared for its fury.

"Dorian is moving toward the west near 7 mph (11 km/h). A slower westward motion should continue for the next day or two, followed by a gradual turn toward the northwest," the hurricane center said in its 2 p.m. update. "On this track, the core of extremely dangerous Hurricane Dorian will continue to pound Great Abacos today and then move near or over Grand Bahama Island tonight and Monday. The hurricane should move closer to the Florida east coast late Monday through Tuesday night."

Dorian remains a threat for much of the U.S. East Coast, from Florida to North Carolina, including Georgia, South Carolina and Southeast Virginia.

Expected rainfall in the Northwestern Bahamas is 12 to 24 inches, with isolated areas receiving up to 30 inches, the hurricane center warned.

By the end of the week, five to 10 inches of rainfall is expected in the Coastal Carolinas, some locations up to 15 inches. The rainfall may cause life-threatening flash floods, according to the hurricane center.

The Atlantic Coast from the Florida peninsula north through Georgia could see two to four inches of rain, with up to six inches in come areas.

Satellite view of Hurricane Dorian as of September 1, 2019. Courtesy NOAA.

Hurricane conditions are possible in Florida by late Monday or early Tuesday.

"Dorian is a extremely dangerous category 5 hurricane ... " the hurricane center said. "Some fluctuations in intensity are likely, but Dorian is expected to remain a powerful hurricane during the next few days. Dorian has grown larger in size. Hurricane-force winds extendoutward up to 45 miles (75 km) from the center and tropical-storm-force winds extend outward up to 140 miles (220 km)."

The storms trajectory has confounded forecasters, who say it's still too early to predict where exactly in the U.S. Dorian will make landfall. They warn, however, that it could make impact with the coastal U.S. in Florida, then turn north and bombard a number of coastal states.