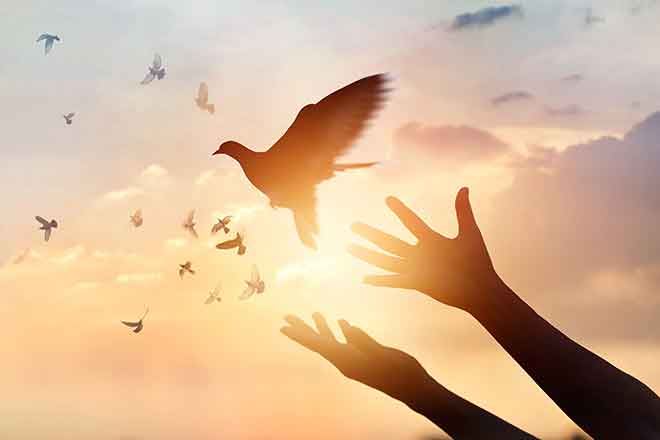 June 5, 2020, it had been just over a week since a white Minnesota police officer, Derek Chauvin, killed George Floyd, an unarmed, African American man. Protests were underway outside Central United Methodist Church, an interracial church in downtown Detroit with a long history of activism on civil rights, peace, immigrant rights and poverty issues.

In response to the COVID-19 pandemic, the church was no longer holding in-person worship services. But anyone walking into its sanctuary that day would have seen long red flags behind the pastor's lectern, displaying the words "peace" and "love." A banner reading "Michigan Says No! To War" hung alongside pictures of civil rights icons Fannie Lou Hamer and the Rev. Martin Luther King Jr., as well as labor-rights activist Cesar Chavez. In line with her church's activist tradition, senior pastor Jill Hardt Zundell stood outside the building and preached about her church's commitment to eradicating anti-Black racism to her congregants and all that passed by.

In our sociology and political science research, we have both studied how race, religion and politics are intimately connected in the United States. Our recent book, "Race and the Power of Sermons on American Politics" - written with psychologist James S. Jackson - uses 44 national and regional surveys conducted between 1941 and 2019 to examine racial differences in who hears messages about social justice at church. We also examined how hearing those types of sermons correlates with support for policies aimed at reducing social inequality and with political activism.

For centuries, many Americans have envisioned that their country has a special relationship with God - that their nation is "a city on a hill" with special blessings and responsibilities. Beliefs that America is exceptional have inspired views across the political spectrum.

Many congregations that emphasize social justice embrace this idea of a "covenant" between the United States and the creator. They interpret it to mean Americans must create opportunity and inclusion for all - based in the belief that all people are equally valued by God.

Politics in the pews

In our book, we find that, depending upon the issue, between half and two-thirds of Americans support religious leaders taking public positions on racism, poverty, war and immigration. Roughly a third report attending worship settings where their clergy or friends discuss these issues and the importance of politically acting on one's beliefs.

Black Americans are also more likely to attend worship settings where clergy and other members encourage them to connect their faith to social justice work. For example, according to a July 2020 Pew Research Center poll, 67% of African American worshippers reported hearing sermons in support of Black Lives Matter, relative to 47% of Hispanics and 36% of whites.

Race also affects the relationship between hearing such sermons and supporting related policies. When statistically accounting for religious affiliation, political party and demographic characteristics, attending these types of congregations more strongly associates with white Americans supporting progressive policy positions than it does for Black Americans and Hispanics.

White worshippers who hear sermons about race and poverty, for example, are more likely to oppose spending cuts to welfare programs than those who hear no such messages at their place of worship.

This is not the case for African Americans and Hispanics, however, who are as likely to oppose social welfare spending cuts regardless of where they worship. In other words, while hearing sermons about social justice issues informs or at least aligns with white progressive policy attitudes, this alignment is not as strong for Blacks and Hispanics.

[The most interesting religion stories from three major news organizations. Get This Week in Religion.]

Clergy of predominantly white worship spaces are often more politically liberal than their congregants. Historically, this has translated into members pushing back when clergy take public positions that are more progressive than their congregation's.

This may explain why white parishioners who chose to attend congregations where they hear social justice-themed sermons tend to be more politically progressive, or more open to sermons challenging previous views, than are other white parishioners.

From words to action

However, when it comes to the connection between hearing sermons and taking political action, race doesn't matter as much. That is, when taking into account religious affiliation, party affiliation and social demographics, people who hear social justice-themed sermons in their places of worship are more likely than other Americans to engage in political activism, regardless of their race.

For example, during the months following Floyd's murder, Black, white and Hispanic congregants who heard sermons about race and policing were more likely than others to have protested for any purpose in the past 12 months, according to data from the 2020 National Politics Study. More specifically, white Americans who attended houses of worship where they heard those types of sermons were more than twice as likely to participate in a protest as other white worshippers. Black and Hispanic attendees were almost twice as likely to protest, compared to those attending houses of worship where they did not hear sermons about race and policing.

Today, many Americans are pessimistic about inequality, political divisions and ethnic conflict. Yet, as these surveys show, social justice-minded congregations inspire members to work for policies that support their vision of the public good.