"The knowledge of wisdom shall sweeten you soul: when you have found it, then there shall be a reward, and your hopes will not be cut short." Proverbs 24: 14

Alumni Week-end: Someone asked me what I thought of it: these are some adjectives: Wonderful, marvelous, so fun and heartwarming to see so many happy people who were eager to share moments and stories and good times about their school days. "It has been said that a person needs at least three hugs a day. "I assure you Readers that many people including me had enough "hugs" and "handshakes" and warm greetings to last for days! It was soooooo good.

Some classes had individual gatherings, others took group photos, and people can tell or contact Terri Bendorf Tuttle if you want one of the many photos that her husband took around the Banquet tables.

The two Chamber outdoor reakfasts have always been one of my favorite happenings because you can see so many people all at once in the grassy setting north of the bank. I noticed that Friday morning the full moon was very bright in the western sky at 7:30 a.m.! The full moon nights were so gorgeous last week. They were those orange full moons and even more so because of all the fires in western states like Oregon, Washington, Montana, Wyoming, and Colorado. During the day time much last week, the days were hazy and appeared foggy but it was an awful ash that certainly was not good for people with asthma and breathing problems. However, on Sunday, September 10, the sky was our incredible Colorado blue.

September 3 and September10 church time at the Weisbrod Extended Care Unit was special with Lane and Debbie Gooden and parishioners, Charlotte Phillips, Margaret DeVault, and Michelle Wykcoff there and September 10, Pastor Russell Parker and Annetta Maxcy led the services.

Both Weisbrod and Prairie Pines had some of their residents ride on western decorated floats. The creators were Teri Castle-Simmons and Cindy Newman of Prairie Pines who with some of the respective staffs decorated the floats. Mike Arth was a helpful citizen who came to lend his help and height.

June Blooding was seated in the Prairie Pines Float. She probably didn't see her daughter, Mary, driving a silver motorcycle with a side car for Vicki Williams of Oregon and Areta on the Veteran's Float. Daughter, Mickie, flew here from California and was joined by her sister, Sylvia, on the sidelines.

The three Richie brothers, Duane, Richard, and Jerry, teasingly said they were having a Men's Meeting in the Gas and Grill when they saw some spies, the Durrett sisters, Jean, Carol, Betty, and Barbara. They spent several hours enjoying looking through old school annuals that someone had brought for them and many others to look through.

the three Forsyth brothers, Douglas, Scott, and Mark. Rhonda Cloyd of Idaho and her brother, Gary Cloyd and wife, were especially delightful to see. Other former Haswell residents that I saw visit were the three Voss siblings, Carolyn, Gail, and Dennis and cousin Terri Herrell Voss. Dick Ohrman, Dorothy Gifford and Larry Gifford and Frankie and Rosemary Stoker, Paul and Glenda Stoker were among others I saw. Emma Briggs's children, Scotty and Valerie, were there too. Ronnie Howe had most of his adult children and grandchildren there. From Arlington, there was Dr. Katy Lou Anderson, C. D. Anderson, Floyd Griswould and his clan, Virgil and Wanda Lessenden and their children and grandchildren, Lowell and Joyce Johnston, Kent and Pam Johnston. There may have been many more, but those are the family groups, I observed.

For several days, I wondered who that curly haired bearded mystery man was. Finally, he lifted his cap and said, "Kim Peck."

Parade Marshals were Roger Saffer, the Citizen of the Year and wife, Loraine, and the Volunteer of the Year, Eunice Weber.

Karen Eikner and daughter, Mina, recently of Ohio, drove down from their new home in Castle Rock. They were glad to see Karen's brother, Wesley, from Texas. 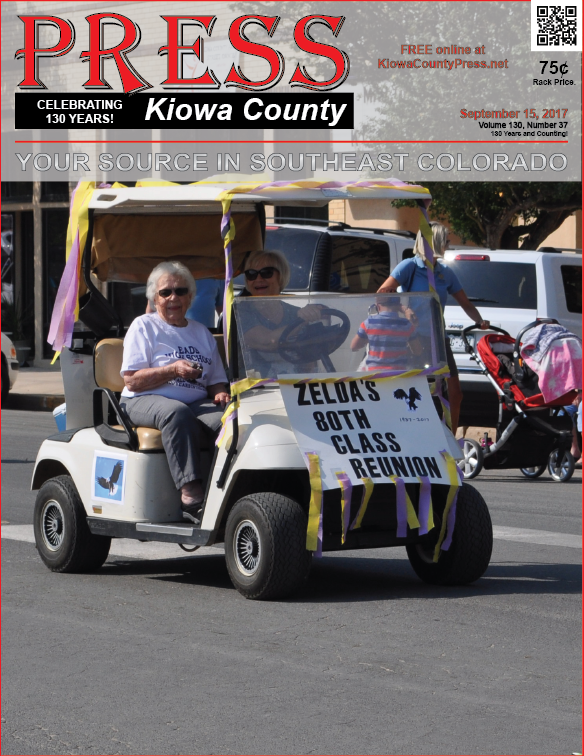 Zelda Peterson was the oldest EHS grad; age 97 attending the Fair and Banquet. She amazed everyone, by just walking independently all around. She was accompanied by her daughters, Jan and Charlotte, and spouses.

Bubbly Jolyn Gereke Uney drove in the parade her three (or four) little grandsons who stood in her snappy red convertible sports car. She was eager to show them the country life that she had enjoyed so much.

I was thrilled to see that Mike Crain and Domonic Hernandez (and maybe others) had recently painted the outside of the grandstand red trimmed in white. I love it! It is a remarkable improvement and so pretty from the highway.

The Alumni Banquet was well attended by over 400 people. We were sad that some could not come who had to remain in Texas and Florida because of the storms and flooding. What a blessing to have Sandie Kelley come from Denver to help Lola Igou and Donna and Max Owens serve banquet plates to people where not so mobile. Plus, Sandie was able to see her son, Donnie, and her daughter, Lori, and other relatives. Kas Fischer was a delightful Mistress of Ceremonies and Ed Buck invited people to go with him to help in the weather disaster states and prayed for the good food and fellowship. Alumni officers, Nancy Walker McCracken, Marty Miller, Kim Crow Richards, and Verna Kelley Ebright and other committee members were acknowledged and thanked as well as the teachers who were given tall bottles of Sparkly Rose.

Most popular was to see all the former cheerleaders who came up near the stage and led the "School Song." Rob Kelley was the first one there clapping and cheering! That was humorous and great to see and hear. Rob didn't quite do the splits but he tried.

brothers of the Brown family: Don of Idaho, Lee from Oklahoma, Louis of Eads, Lynn from Lamar, and Gilbert of Chivington.

The three Wissel sisters, Madonna, Phyllis, and Lois, were at most all the events.

One of the nicest surprises was the wonderful hamburger bar that the staff of the KVAY Radio station in Lamar served Thursday evening before and during the Ranch Rodeo.

Next week, I will share more Fair and Reunion news. In the meantime, please know my dear former students and friends, that it was such a JOY to see you all.