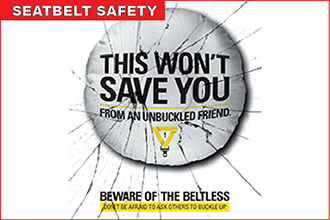 In 2015, Colorado saw an alarming spike in traffic fatalities, totaling 545 fatalities compared to 488 in 2014, an 11.7 percent increase. Even more telling -- the 15 percent of Coloradans who don't buckle up represent 52 percent, or 181, of all 2015 passenger vehicle fatalities. In response, the Colorado Department of Transportation (CDOT) has launched a new statewide campaign to address the seat belt crisis -- Beware of the Beltless.

"Motor vehicle traffic crashes are one of the leading causes of death for young adults in Colorado," said CDOT Executive Director Shailen Bhatt. "Many people incorrectly assume that not buckling up only puts you at risk -- or has consequences that only affect you. That is simply not the case. An unbuckled passenger in your vehicle increases your risk of being hurt or killed by 40 percent. You should never be afraid to ask others to buckle up -- it's for the safety of yourself and those around you."

"Injuries from not wearing a seat belt can include extensive internal damage to the heart, lungs and aorta, all of which can potentially be life threatening injuries," said Dr. Frederic Pieracci, trauma medical director at Denver Health. "If the force of the impact causes the person to be ejected from the car, there is also a great risk for head injuries and possibly, traumatic brain injury, which in the most severe cases can lead to death or a persistent vegetative state. If there is one piece of advice I can offer, it's to take the time to buckle your seatbelt."

The National Highway Traffic Safety Administration estimates that Colorado could save 63 lives and countless injuries annually by increasing seat belt use to 100 percent.

The campaign's overarching message is a new approach to seat belt safety. CDOT and campaign partners want the public to realize not wearing a seat belt doesn't affect just you -- you can become a direct threat to the people around you. In the event of a crash, an unbelted driver or passenger can act as a projectile and cause serious or even fatal damage to others in the vehicle.

The campaign will run through September 15.