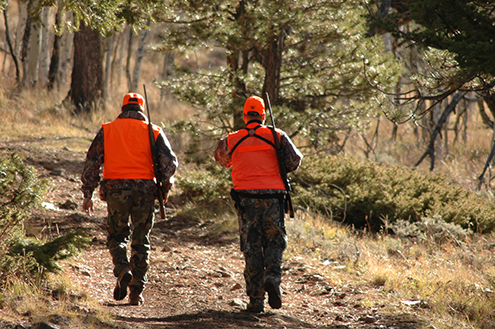 The application deadline for Colorado's Primary Draw hunting licenses is quickly approaching, so don't miss out on your chance to get preference points or plan the hunt of your dreams. The deadline is April 6, 2021, at 8:00 p.m. Mountain Time. Apply online at https://www.cpwshop.com/licensing.page

A primary tool used in the management of Colorado's big-game animals is a limit, or quota, on the number of licenses issued in most game management units (GMUs). When applying for a limited license, a preference point is awarded when an individual is unsuccessful in drawing their first-choice hunt code. Preference points provide a mathematical advantage when applied to future drawings.

Some things to remember:

The following lists show the last point at which a license was drawn for a specific hunt code in 2020. The last point drawn listed does not denote that all applicants at that level drew, but that at least one applicant at that level drew. Quotas and applicant pools change from year-to-year, so a hunt code that takes two preference points to draw in 2020 may take more (or less) the following year. Unsuccessful applicants will be awarded a preference point for use in future drawings.

How long will it take to draw a license?

Statistics from previous years may be used to estimate the approximate time required to successfully draw a license. For example: If a unit allowed 20 licenses with 60 applicants, zero preference points are required, 40 were unsuccessful. These 40 were awarded a preference point.

Assuming that the quota for this unit remained the same for the next year, and these 40 apply, 20 will draw a license using their preference point and 20 will be awarded a second point. An applicant with no points may be able to draw a license in three years if this pattern persists.

Things to know when reading the lists:

Float -- Quotas marked with "Float" indicate licenses of the same sex that are shared between two or more seasons.

+ = A plus sign means additional GMUs are included in this hunt code.

Preference-point requirements can be found at the Colorado Parks and Wildlife website by clicking the "Things To Do" link, proceeding to the "Big Game" link under the "Hunting" heading and finding the information under the "Hunting Statistics" link. There are separate tables for each species. Preference-point requirements have the ability to change dramatically from year to year based upon the number of applications and the number of licenses issued for each unit, but usually don't vary much from year to year. Visit the website at: cpw.state.co.us/bg-stats.