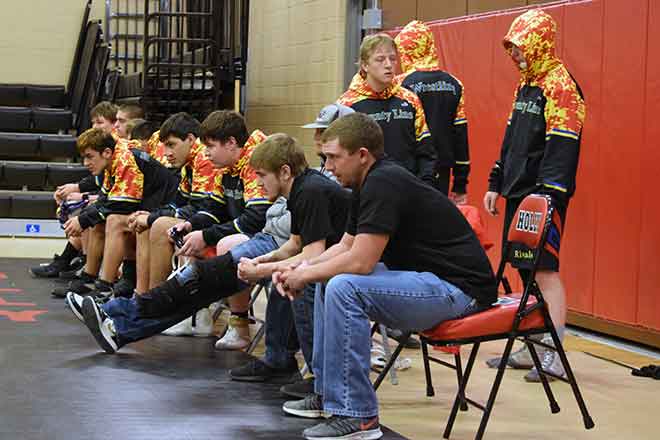 Busy was the best word to describe the week for the County Line Rivals Wrestling team. Uhland and company traveled to Yuma Thursday night for tri-meet with Yuma, and Lamar JV.

The first dual of the night was against Lamar JV with the Savages getting the win 69-9.

County Line then took on Yuma. Yuma would walk away victorious beating the Rivals 44-30. 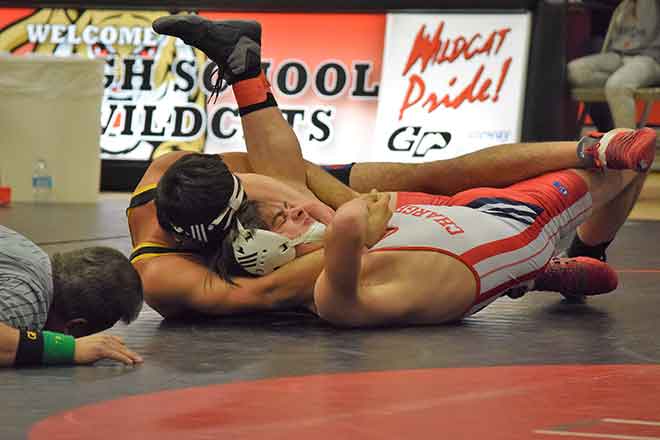 Jaime Ibarra puts the hurt on his Crowley County opponent during the Quad held in Holly, January 24, 2020. Courtesy Rhonda Uhland.

Friday night the team traveled to Holly for a quad meet with Holly, Crowley County, and Swink. The Rivals had a much better showing this time. Their first dual was against Crowley County, both teams finishing at 33.

The Rivals watch and wait for their turn on the mat during the Holly Quad. Courtesy Rhonda Uhland.

To end the marathon weekend, County Line made the long trip to Strasburg for the Tony Tresch Memorial tournament. As one of thirteen teams, County Line held

their own finishing the day in second place at 178.5 points. Strasburg won their home tournament with 183 points. Fowler and Limon finished in third and fourth place respectively.

Ty Michael won his first match of the day in a 5-man round robin at 106 pounds. He pinned Johnathon Hannigan of Platte Canyon in 4:52. After a bye in round two, Michael pinned McFarren from Platte Canyon in 1:16. His next opponent was Michael Romero from Swink. Ty fell to the Lion after 1:20 but finished strong winning his last match by pin against Bradley Robinson of Gilpin County via pin in 3:05. He took home 2nd place honors.

Brenden Reifschneider was the 113 pounder for the Rivals. He fell into a 6-man round robin where he dominated his first match pinning Reagan Schneider from Platte Canyon in just :51. In round two the Rival suffered a loss to Fernando Salazar from Fowler. After a 7-2 loss in round three to Tyler Frank of Merino and loss by pin in :20 against Tatum White of Swink in round four, Reifschneider finished on a high beating Cameron Natelli of Ellicott 16-0. He finished the day in 4th place.

Tate Krentz filled the 132-pound spot for County Line. He drew a bye in round one and began the day during round two. Here he matched up against Noah Hartman from Platte Canyon. Hartman pinned Krentz after 1:08 of wrestling. On the consolation side of the bracket Krentz drew another bye. He then defeated Heath Eddinger from Ellicott 10-1 to move into the consolation championship match. There, he pinned Noah Hartman from Platte Canyon in 3:17 and earned 3rd place.

Aiden Michael wrestled in the 145-pound bracket. After a bye in round one, the Rival pinned Caden Bowman from Cherokee Trail in 3:22 to advance to the semifinals. He pinned Aiden Jack of Calhan in 2:30 to slide into the championship match. Ky Bandy of Limon would defeat the Rival in an 11-5 decision. Michael took home 2nd place.

Angel Soto Delgado lost his first match of the day against Duke Fellman of Cherokee Trail at 152 pounds. Advancing after a bye in round two, the Rival battled Will Wtizel from Stratton but wasn't able to get the win and was eliminated from the tournament.

Cade Zordel got a late state at 160 pounds after drawing a bye in round one. Round two pitted him against Brayden Tacha from Limon. The Badger pinned our rival in 2:01 forcing him to the consolation side of the bracket. Zordel would win his next two matches against Tanner Natelli from Ellicott in a 4-2 decision and Zachary Armour from Stratton, 4-3, to earn 3rd place.

AJ Wilk was the varsity wrestler in a 5 man round robin for the Rivals. He lost a 5-0 decision to Blake Coombs from Strasburg in round one. After a bye in round two, Wilk came out strong pinning Adam Wilson of Ellicott. The Rival pinned his teammate Christopher Torres in round four but fell to Trenton Manuel of Cherokee Trail 6-4 his final match of the day. He finished in 3rdplace.

Christopher Torres also spent his day at 170 pounds. His bye came in the first round. In round two the Rival pinned Adam Wilson from Ellicott in 2:30. Torres lost to Trenton Manuel of Cherokee Trail after 1:25 in round three. Rounds four and five were tough for him as he fell to teammate AJ Wilk in :14 by pin and Blake Coombs of Strasburg in 3:40 also by pin. He finished the day in 4thplace.

Jamie Ibarra was the scorer at 182 pounds for County Line. In a 4-man round robin the Rival pinned Kaysen Schmidt in 3:33 and Jakob Ebbs from Platte Canyon after :51 his first two matches of the day. In round three in typical County Line fashion Ibarra was pitted against his teammate Angel Medina. Ibarra won 14-11 and took home the gold.

Angel Media also weighed in at 182 pounds. He dominated his first match pinning Jakob Ebbs from Platte Canyon in just :33. In round two he defeated Kaysen Schmidt of Limon 12-7. His final match of the day was a loss to teammate Jamie Ibarra 14-11. Medina was the second piece of a "one-two punch" at 182 pounds coming in second place.

Brooks Jones was the 195 pounder in a four man round robin. He was caught in a pin by Gavin Unrien from Fowler in his first match of the day. In round two he fell to Trevor Smith of Strasburg after 1:13. Jones ended on a positive note as he won his last match pinning Xander Smith of Strasburg. He finished in 3rd place.

Taite Johnson was the Rival in a 6-man round robin at 220 pounds. It was a tough morning for Johnson as he lost at 5-2 decision to Chad Sutherland from Strasburg in round one and fell to Austin Jandik of Cherokee Trail by pin in :13 his next match. In round three Johnson got on the wining side with a pin over Jett Godwin of Platte Canyon in just 14 seconds. Round four gave him another win by pin over Wyatt Vermeer of Byers in 1:00. In his final match of the day, he lost to Justin McCormick of Strasburg by pin in 3:20. The Rival earned 4th place.

Chase Stolzenberger dominated the 285-pound bracket for County Line. He moved his way to the top of the podium winning all five matches by pin. First off was Hayden Williams of Ellicott falling in :46, Carlos Galaviz of Ellicott in :52, William Siegrest of Gilpin County in just :07, Jesse Burt of Strasburg in 3:30 and finally Jasper Smith of Fowler in :52. The Rival took home the gold medal.

Dear Dietitian – How can I lower sodium...