County Line Rivals Compete in Back to Back Competitions

It was another hard week for the County Line Rivals but with huge strides they made a strong showing in McClave on Friday night with a Tri Meet against Amarillo Boy's Ranch and Cheyenne Wells, then again putting on their singlets (which they haven't gotten their Rival singlets yet) and taking it one match at a time at the Holly Christmas Tournament.

Let's begin with the Tri Meet, of course we won the dual with Cheyenne Wells as we only matched up with one of their wrestlers.  Aiden Michael at 132 pounds faced a very salty Tiger, Jade Cozart, and lost by fall in 3:02.  The rest of the weights received forfeits.  Dawson Roesch does get an exhibition match with Dawson Worley and it was exciting to the finish with a, 2-1 decision win. 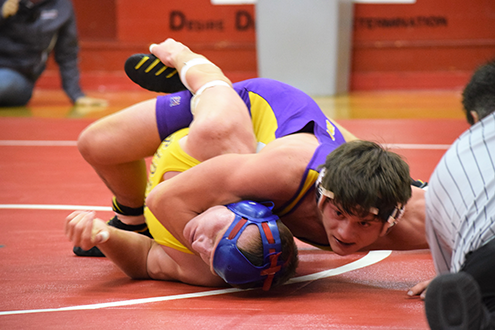 Amarillo Boy's Ranch brought several more wrestlers to the table and with open weights on the Rivals roster, due to several under the weather this week, the Texas bunch took the dual, 46-32.

Matches wrestled in this matchup were:

132 pounds, Aiden Michael takes it to Devon Gray by putting his shoulders to the mat in 2:56.

170 pounds, Trevor Randel gets in six full minutes and comes out on top with a major decision over Tyler Eggers, 11-2.

182 pounds, Dawson Roesch also goes the distance and comes away with a major decision over Tristen Vega, 12-4.

220 pounds, Jayce Bauer gets the first period pin over Jacolby Miller in 1:29.

Zack Fowler received a forfeit at 160 pounds but the other open weights all went to Boy's Ranch.

Short in numbers and teams the Holly Christmas Tournament had weights combined to make for a more competitive turn out, but every weight was a round robin.

Tate Krentz wrestled one of his best tournaments getting a win over a Boy's Ranch opponent that had beat him the night before and finishing in 2nd place.  Krentz had a 4-2 decision over Jeremy Galicia from Boy's Ranch; a 1:14 pin over Nathan Reimer from Lakin; and a fall to Kobe Chavez from Ulysses in 0:45.

Samuel Adams was another 4th place finisher with a first match fall to Nathan Miller from Greeley County in 0:55; a fall to Noah Horinek from Sublette in 2:32; and a fall to Devon Gray from Boy's Ranch in 2:26.

Aiden Michael received a 2nd place medal for his work with a first-round decision victory over Tanner Randles from Sublette, 6-2; a loss by pin to Jade Cozart from Cheyenne Wells in 2:30; and a 9-2 decision over Jaydin Elkins from Boy's Ranch.

Jonathan Burbank also finished in 2nd place with a second period pin over Brandon Peters from Ulysses in 2:36; a close, 6-4 win over Ethan Stephens from Boy's Ranch; a quick 0:27 pin over Jake Ferrell from Sublette; a major decision loss to the tournament champion, Ethan Burns from Holly, 18-3; and another quick victory over Jacquelyn Brown from Ulysses in 0:24.

Sam Wollert was a 2nd place finisher going the distance with Alex Venegas from Holly but falling short, 8-2; getting the pin over Dylan Jones from Boy's Ranch in 0:30; and getting the win over teammate Cade Zordell in 0:16.

Cade Zordell was a 3rd place finisher in his weight bracket with a quick 0:56 pin over Dylan Jones from Boy's Ranch; losing to Alex Venegas from Holly in 2:59; and losing to Sam Wollert in 0:16.

Zack Fowler was a 3rd place medal winner getting a tough first round match up with Grayson Flint from Holly and suffering the fall in 4:58; losing by major decision, 13-5, to Nicholas Sommer from Boy's Ranch; getting the first period pin over Carson King from Ulysses in 0:59; also getting a pin over Alex Maravilla from Ulysses, 20 seconds quicker, in 0:39.

Trevor Randel was the tournament champion in the 170-pound weight bracket with a pin over Reese Garetson from Sublette in 3:25; a major decision victory, 8-0, over Tyler Eggers from Boy's Ranch; and a pin over his teammate, A.J. Wilk in 0:35.

A.J. Wilk was a 3rd place finisher with a 6-0 decision loss to Tyler Eggers from Boy's Ranch; a win by pin over Reese Garetson from Sublette in 1:50; and a loss by fall to teammate Trevor Randel in 0:35. 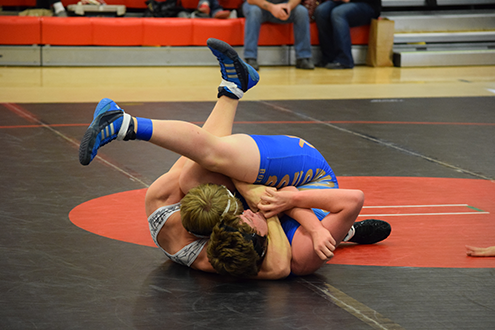 Jayce Bauer had a 2nd place finish for the day getting a first-round victory over Jacolby Miller from Boy's Ranch in 0:48; a loss by pin to Cade Sires from Baca County in 4:46; a super quick, 0:12 pin over Damina Badillo from Sublette; and another first period pin in 0:47 over Domanick Miller from Lakin.

The Rivals will be enjoying a well-deserved break and will be expected to come back in shape and ready to wrestle at the Lamar Tournament which will be Saturday, January 6th, 2018.  Go Rivals!

Photos - Top: Trevor Randel working on the pin during Saturday action in Holly.  Randel was the 1st place finisher in his bracket. Bottom: Dawson Roesch get the pin over his opponent at the Holly Christmas Tournament.  Roesch brings home first place for the day. Courtesy Rhonda Uhland.