EarthTalk – How do fungi help clean up contaminated soil?

How is it that fungi can help clean up contaminated soils?

Like animals, fungi derive energy by breaking down large molecules into smaller compounds. They do so by secreting enzymes and acids onto whatever it is they intend to consume, and then absorbing the byproducts of this digestion process. While fungi primarily consume biological matter (like dead wood), their enzymes can also break down a wide array of man-made compounds. In fact, fungi are so good at this, we're now employing them to clean up contaminated soils via a technique known as mycoremediation. 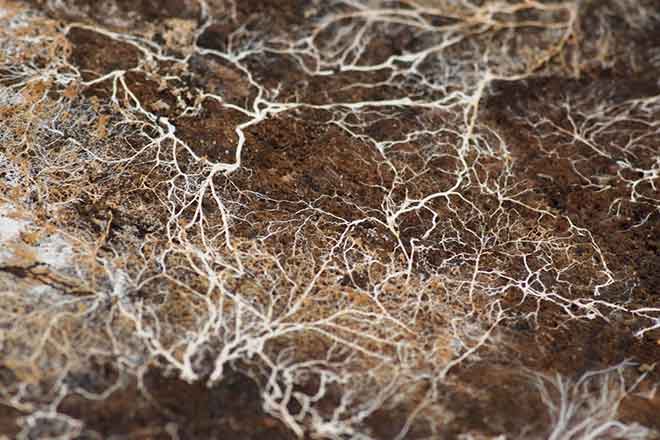 Underground mycelium networks can absorb and break down a wide range of natural and man-made compounds, and that's why we're using them to clean up contaminated sites naturally. Credit: Kirill Ignatyev, FlickrCC

Of course, these fungi are just doing what they evolved to do eons ago. Underneath our feet, massive fungal networks run through the soil, with many fungal species developing a symbiotic relationship with plants whereby a part of the fungus (the mycelium) grows adjacent to--and sometimes inside of--the roots of the plant. The mycelium is capable of breaking down and transporting nutrients and minerals essential for the plant's survival. After detecting and digesting these compounds, the mycelium ferries them to the plant's roots, where they're absorbed. In exchange, the plant releases compounds that are vital for the fungi's survival.

It's the fungi's ability to break down and/or transport compounds that make them useful for restoring damaged soils. Often, these soils have been saturated with compounds made up of dangerous--and relatively large--molecules. By breaking these molecules into smaller pieces, fungi help to reduce their toxicity. In other instances, soils are contaminated with fundamental elements such as cadmium, arsenic, and mercury, which can't be broken down. However, fungi still have the ability to uptake and transport these substances, and to eventually concentrate them in their fruiting bodies (mushrooms). We can then remove the fruiting bodies, and the contaminated ecosystem will be one step closer to regaining health.

If fungi are so effective at cleaning up our environment, why isn't this technique more widespread? For starters, it's a slow process. As with any biological strategy for environmental clean-up, mycoremediation is limited by the speed of metabolism. If a polluted area needs to be cleaned quickly, other options may be better. Another issue with mycoremediation is that it often fails to completely rid soil of a given toxic compound, instead simply reducing the concentration. It can also be hard to justify economically, as no one wants to eat a mushroom full of heavy metals.

However, the biggest reason for mycoremediation's relative lack of fame and use might simply be a lack of data from field tests. It's a relatively new technique, without many case studies to support its use (despite a good amount of lab testing). Thankfully, this situation is changing. In 2017, for example, a large batch of oyster mushrooms was used to remediate soil damaged by California wildfires. The same variety of fungus has also been used to clean up oil spills and other toxic messes.