EarthTalk – We can already capture carbon to make fuel. Why not do more?

If we already know how to capture carbon dioxide (CO2) and turn it into fuel, why aren't we doing more of it?

With recent measurements detecting the highest levels of atmospheric CO2 in human history--and experts warning we have less than a dozen years to turn around our profligate emissions to avoid cataclysmic changes--the time is nigh to start ratcheting down our carbon footprints. One solution that seems obvious but has been slow to get out of the starting gate is scrubbing large amounts of CO2 from the air and recycling it as a feedstock to produce carbon-neutral fuels to power our machines.

We have known how to capture CO2 from the air at large scale since the 1950s, but it wasn't until the late 1990s that environmentalists started looking to so-called "Direct Air Capture" (DAC) as one of a suite of tools at our disposal for dealing with the greenhouse effect. Since then, researchers have been scrambling to come up with the most efficient ways to capture CO2. 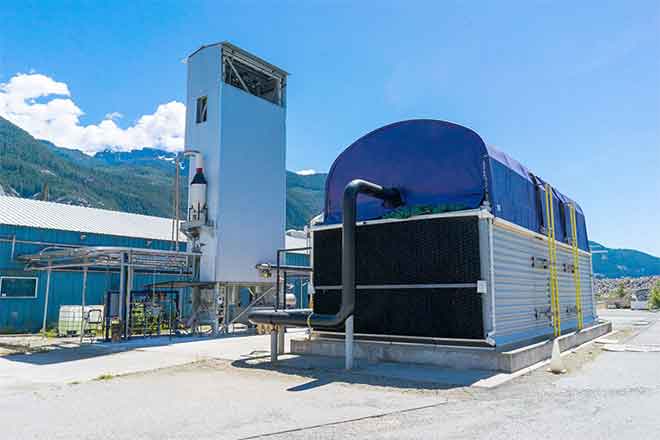 Carbon Engineering has proven at its Canadian pilot plant in Squamish, British Columbia that it can suck greenhouse gases out of the air through so-called Direct Air Capture (DAC) and process them into liquid fuels at a cost nearly as cheap as producing fossil fuels.

Massachusetts-based start-up Carbon Engineering formed in 2011 in an effort to produce and eventually commercialize DAC technology that can use captured CO2 to make fuel at costs competitive with producing conventional fossil fuels. After several years of research and development and implementation of its technologies at a pilot plant in British Columbia, the company has been able to get the costs of capturing CO2down to ~$100/ton--six times less than previous models predicted was possible.

But it's what happens next that has environmental advocates jazzed. Carbon Engineering's solar-powered electrolyzer splits water into hydrogen and oxygen, and then combines the hydrogen with previously captured CO2to make carbon-neutral gasoline, diesel or even jet fuel. Assuming a $100/ton cost for capturing atmospheric CO2, the company can produce these eco-friendly fuels for about $1/liter, which is only marginally more expensive than their fossil-fuel counterparts. The hope is that costs will come down to below fossil fuels as demand grows and facilities scale up. Also, as more states follow California's lead in requiring increasingly significant portions of their fuel mixes to come from "low-carbon" sources, demand for these green alternative fuels will rise and prices will likely drop even more.

R&D like this isn't limited to the U.S. Spain's SUN-to-LIQUID project uses unique solar concentration technologies that combine sunlight with oxygen and atmospheric CO2 to get three times as much energy out of the sun's rays as existing solar "reactors." The resulting "synthesis fuel" combines hydrogen and carbon monoxide and could be used to power vehicles or any type of engine equipped to deal with it.

And a team of Swiss and Norwegian scientists wants to put such technologies to use on millions of solar-powered floating islands at sea that could suck CO2 out of the air and turn it into fuel without taking up any land or bothering human neighbors. Such a plan may seem far-fetched, but we need to be open to new idea if we are going to turn the tide on climate change before we reach the dreaded "point of no return."