EarthTalk – What is the “flying shame” effect?

What is so-called "Flying Shame" and what's the climate connection?

"Flying shame" is one of those memic terms that has sprung up recently to describe guilting people out of taking airplane trips given the massive carbon footprint of air travel. Some call it "The Greta Effect" in a nod to Swedish teen environmental activist Greta Thunberg, who swore off air travel given its disproportionate drag on her efforts to slash her own carbon footprint.

Of course, Thunberg isn't alone. In fact, the original concept of flying shame ("Flygskam") actually started in Sweden, where "flying is becoming the new tobacco" in the words of Andy Rowell of the non-profit Oil Change International (OCI). A recent survey by the World Wildlife Fund found that 23 percent of Swedes have abstained from air travel in the past year to reduce their carbon footprints--a jump of six percentage points from a year ago. Meanwhile, 18 percent of respondents opted to travel by train instead of airplane over the course of the year. 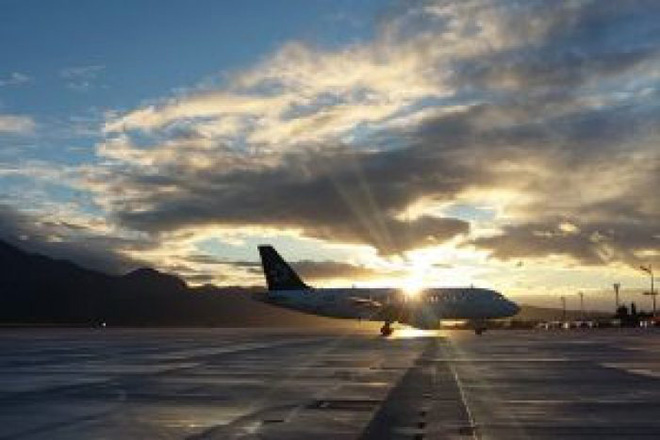 And the Swedes aren't the only ones cutting back on flying. Other Europeans are following suit, which makes sense given the excellent rail and ferry systems transecting Europe as practical alternatives to flying. The concept has been slower to catch on in the U.S. given greater distances and limited passenger rail options.

Regardless, air travel is growing by leaps and bounds overall worldwide. "The problem is that, as the science demands we radically reduce carbon emissions, the number of passenger aircraft is set to double by 2035," worries OCI's Rowell. Meanwhile, each and every day the aviation industry consumes five million barrels of oil. In 2017 alone, the backs of airplanes emitted 859 million tons of greenhouse gas emissions. Indeed, burning jet fuel contributes roughly 2.5 percent of total carbon emissions worldwide. Analysts think this proportion could rise to 22 percent by 2050 as other sectors clean up their acts quicker.

Meanwhile, there are no truly green, practical alternatives to kerosene-based jet fuel on the horizon. "Aircraft are becoming more fuel-efficient, but not quickly enough to offset the huge demand in growth," reports The Conversation. "Electric planes remain decades away, weighed down by batteries that can't deliver nearly as much power per kilo as jet fuel."

So what's to be done? Swear off flying, that's what. Flight Free USA is a grassroots campaign trying to get at least 100,000 Americans to commit to not flying at all during the calendar year 2020 in order to send a "clear signal to industry and politicians--and also to each other--that there are many who are willing to change their lifestyles to protect the climate."

Yet another slice of the apple is called A Free Ride, an idea which assigns an escalating flight tax depending on how many flights you take per year. One flight per year would be free of tax, while 14 flights a year would cost a pretty penny in taxes, with the proceeds going to offsetting the jet fuel with green energy projects elsewhere.