What exactly is "climate feminism?"

Climate change impacts the everyday lives of all citizens around the globe, but certain communities are disproportionately affected. Women, in particular, shoulder a disproportionate burden as they are most reliant on natural resources for their livelihoods but lack the needed resources to properly respond to climate disasters. With women representing over 70 percent of the total global population living in poverty, the United Nations estimates that 80 percent of those displaced by climate change are women.

At the very core of female climate change vulnerability is the pervasiveness of patriarchy and gender hierarchies. Throughout history, women have been suppressed in politics, economics and labor, and many are forced to remain in the domestic sphere with the primary duties of raising children. Flooding, drought and other effects of climate change, such as increased heat and air pollution, can disproportionately impact women, particularly pregnant women, causing premature births, stillbirths and other problems. 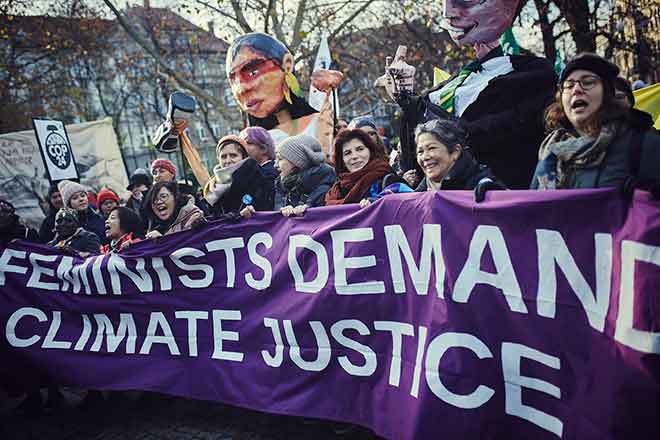 "[The climate crisis] grows out of a patriarchal system that is also entangled with racism, white supremacy and extractive capitalism,"

says author and climate activist Katharine K. Wilkinson. And while women may be the most impacted by climate disasters, they have limited opportunities to participate in decision-making processes. Wilkinson, co-editor of a recent book of essays on climate feminism called All We Can Save, adds that the unequal impacts of climate change make it harder to achieve a "gender-equal world."

Despite historical setbacks, climate feminists have made much progress in recent years, with increased female representation in government roles and leadership positions. Today, many of our climate justice leaders are women. Youth activist Greta Thunberg has captured the attention of global leaders, demanding they take immediate action against climate change. U.S. Representative Alexandria Ocasio-Cortez developed and proposed the Green New Deal, pushing the U.S. government a step closer to recognizing the scale of our climate crisis and enacting drastic environmental policy changes.

Climate feminists believe women should be leaders in the environmental movement because their experiences with institutional sexism and other inequalities resulting from the way our society is structured engender a deeper commitment to fighting for justice and equality. Additionally, women tend to prioritize making change over being in charge--and recognize the importance of nurturing a sense of community in the broader climate movement.

That said, how can we help advance climate feminism? Men in positions of power can certainly change the face of climate leadership by listening to the ideas of women from diverse backgrounds--and stepping back for women to make the decisions and set the vision. Most important, women need more leadership positions in local sustainable management and development in addition to increased representation in the federal government. National climate policies that are gender-responsive can not only bring greater responsiveness to the public's needs but also help dismantle ethnic or gender divides in the environmental field, pointing toward a more peaceful and sustainable future.