EarthTalk – what is the so-called Green New Deal?

Dear EarthTalk: What is the so-called Green New Deal proposed by Alexandria Ocasio-Cortez, and is Congress likely to go for it? -- Mark Talarico, Brooklyn, NY

The concept of a "Green New Deal" (GND), first called for in a 2007 New York Times op-ed by Thomas Friedman, has been in the news lately thanks to a protest outside of Nancy Pelosi's office in mid-November a week after the 2018 mid-term elections when Democrats took back the House. The goal of the GND is to put America at the forefront of green technologies to meet or exceed our Paris climate treaty commitments while boosting the economy and reducing economic inequality.

Think of it as like President Franklin Delano Roosevelt's original "New Deal" that helped get Americans back on their feet economically after the Great Depression through the creation of millions of federally-funded jobs that not only employed people but boosted U.S. economic productivity. The GND aims to give Americans a leg up in profiting off the transition to greener energy sources while simultaneously reducing the divide between the haves and have-nots. 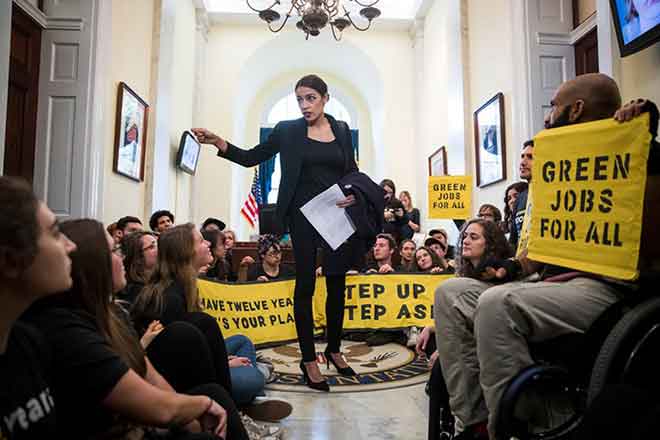 Congresswoman Alexandria Ocasio-Cortez is pushing for the creation of a new House Select Committee on a Green New Deal to detail a "national, industrial, economic mobilization plan capable of making the U.S. economy 'carbon neutral' while promoting 'economic and environmental justice and equality'."

At that November protest, hundreds of activists affiliated with the so-called Sunrise Movement showed up to call on Pelosi to back omnibus economic stimulus legislation that would put millions of Americans to work on facilitating the transition to an economy powered by 100 percent renewable, emissions-free energy. Later that day incoming Congresswoman Alexandria Ocasio-Cortez showed her support by proposing the creation of a new House Select Committee on a Green New Deal tasked with detailing a "national, industrial, economic mobilization plan capable of making the U.S. economy 'carbon neutral' while promoting 'economic and environmental justice and equality'."

"There are so many different progressive issues that are important, and climate change and addressing renewable energy always gets to the bottom of the barrel," Ocasio-Cortez told The Intercept. "That can gets kicked from session to session and so what this just needs to do is create a momentum and an energy to make sure that that it becomes a priority for leadership."

At least 45 House members have expressed support for the GND, while eight likely Democratic presidential candidates (including Jay Inslee, Cory Booker, Kamala Harris, Bernie Sanders and Elizabeth Warren) are also behind it. And with the majority of Americans favoring taking strong action against climate change even if it means higher taxes, implementing some of kind of GND seems like a no-brainer.

But environmentalists might not want to hold their breath. For starters, Ocasio-Cortez's proposal for the creation of a new House Select Committee on a Green New Deal won't be ready for a full House vote until 2020. Also, just because 40 members of Congress are supportive now doesn't say anything about where the other 395 Congresspersons stand, let alone the 100 members of the still-Republican-controlled Senate. Meanwhile, conservative critics point out that a Green New Deal could actually hurt the economy more than help it given how reliant we are on abundant and cheap fossil fuels. Even some liberals worry that the GND is trying to bite off more than we can chew. Only time will tell if something like the GND will become the law of the land--and many greens are keeping their fingers crossed.